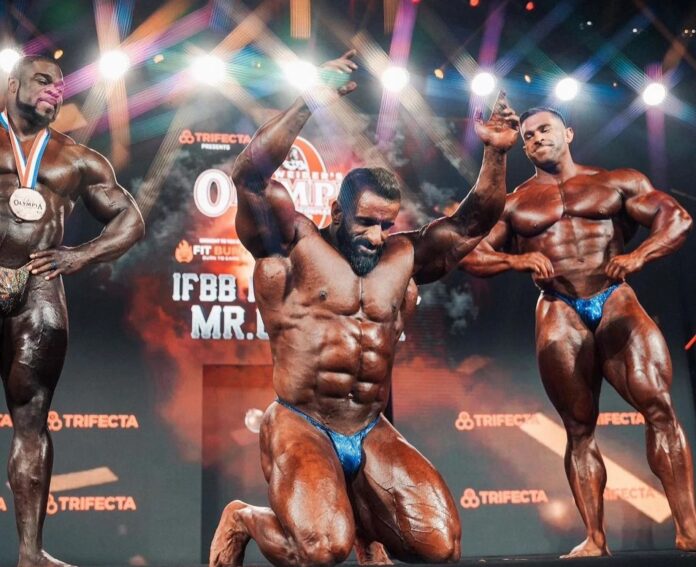 The 2022 Mr. Olympia returned to Las Vegas after spending two years in Orlando due to the pandemic. Now, the event is back home and continues to grow.

The full results have been announced and it was highlighted by the Men’s Open division.

Hadi Choopan has been a threat to the crown over the last three years and has finally reached the top. He has been named the new Mr. Olympia champion. Derek Lunsford finished as the runner-up in his first Men’s Open competition. He made the jump from Men’s 212 and showed that he belongs in Open bodybuilding.

Big Ramy entered the competition as the reigning two-time champion but was put to the test immediately in prejudging. Many competitors, such as Brandon Curry who finished fourth, were in great shape from the start. Nick Walker improved his position from last season and finished third.

The Men’s Open division headlines the show with one of the deepest lineups we have seen in quite some time. It lived up to the hype this year and showed that the new generation of bodybuilders have arrived and are here to stay. Prejudging was very telling, with different competitors being placed next to one another.

The event began on Friday with prejudging in the morning followed by the announcement of results from six divisions. To end the night, the Men’s Open competitors took the stage for prejudging. Below, you can find the full results from Friday night.

Here are the first-place winners for each division at the 2022 Olympia. 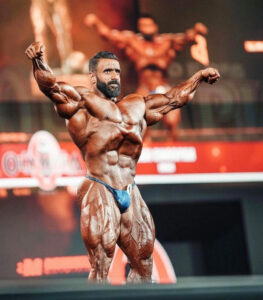 After many thought he could have been crowned champion in 2021, Hadi Choopan came in just as conditioned in his best shape and reached the pinnacle of the sport. In his first competition in Men’s Open, Derek Lunsford finished as the runner-up.

After winning two consecutive titles, Big Ramy dropped to fifth this year. Brandon Curry had finished as the runner-up to Ramy in each of the last two years and ended up fourth. Nick Walker jumped into the top three as well.

The Classic Physique division continues to grow in size and in talent year after year. With plenty of young talent, a familiar name remained at the top. For the fourth consecutive year, Chris Bumstead has won the Classic Physique Olympia title.

During prejudging, Bumstead and Ramon Rocha Queiroz were paired up throughout. The top two were determined early and it took the judges some time to pick a winner. This continued on Saturday night as the group went through comparisons. Ramon Dino finished as the runner-up while Urs Kalecinski improves one spot from last year and jumps into the top three.

Shaun Clarida was qualified for both 212 and Men’s Open, after winning the Legion Sports Fest Pro in his debut in Open Bodybuilding. Clarida won this title back in 2020 and ultimately chose to stick with 212 in hopes of earning his title back — and that is exactly what he was able to do.

Angel Calderon Frias was able to improve upon his standing for 2021 and finish as the runner-up while Kamal Elgargni rounded out the top three.

Erin Banks is able to reach the top of the division and be crowned Olympia champion for the first time. It was clear during prejudging that the Men’s Physique division was going to come down to two competitors.

Brandon Hendrickson finished as the runner-up to Banks after a title in 2021 and three in the last four years. Diogo Montenegro was able to catapult himself into the top three this year.

Cydney Gillon continued her dominance in the Figure division by winning her sixth consecutive title. In 2017, Gillon took the title from Latoya Watts and has not relinquished it since. She continues to be the class of the division and turned in another strong performance this year.

Lola Montez climbed into the top three and solidified her spot in the Figure division. Jessica Reyes Padilla earned second place after a strong performance.

Missy Truscott is back on top after winning the show in 2020. Reigning champion, who has won three of the last four, Whitney Jones did not compete this year due to health issues. Missy Truscott finished as the runner-up last year and was able to regain her title.

Jaclyn Baker joined Truscott in the final callout during prejudging and earned her place as the runner-up. Arnold Classic champion Ariel Khadr rounded out the top three.

After finishing as the runner-up in each of the previous two years, Natalia Abraham Coelho was crowned Olympia champion.

After winning in each of the last two years, Sarah Villegas finished as the runner-up. Brooke Walker rounded out the top three and proved to be a force all day long. Walker continues to improve her standing in Women’s Physique.

The Ms. Olympia competition was back for its third year since a short hiatus and Andrea Shaw was looking to complete the three-peat. That is exactly what she did as Shaw continues to prove that she is the one to beat in the division.

Francielle Mattos earned her second title when it was all said and done. Mattos was crowned inaugural champion in 2021 and came in as the one to beat.

In the end, the top three remained the same. Mattos was able to win for the second consecutive year. Angela Borges and Isabelle Nunes switched position from 2021. Borges finished third while Nunes jumped one spot into the runner-up position.

Harold Kelley has won the Wheelchair Olympia for the fifth consecutive year. On Saturday afternoon, the best Wheelchair bodybuilders in the world took the stage for competition and it was Kelley who reigned supreme once again.

In March, Gabriele Andriulli defeated Harold Kelly at the Arnold Classic. Andriulli finished as the runner-up and has solidified his spot in the division. Antoni Khadraoui finished third during the event.

This was a group that featured many former champions and a new one has been named as Maureen Blanquisco won the Bikini Olympia title.

Blanquisco and Jennifer Dorie, who finished as the runner-up, separated themselves during prejudging and it stood firm during the finals. Ashley Kaltwasser rounded out the top three. 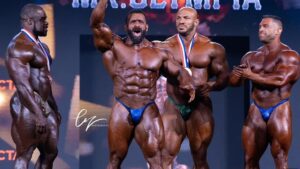 Facebook
Twitter
Pinterest
WhatsApp
Linkedin
ReddIt
Email
Previous article
IFBB Pro Hadi Choopan Wins “The Men’s Open Division” At The 2022 Mr. Olympia Bodybuilding Show. He Is “The New Mr. Olympia”
Next article
US Strength Guidance Recommends: “Don’t Ever Neglect To Train These Muscles”. Here Are Five Of Them, With Recommended Exercises To Incorporate Into Workouts