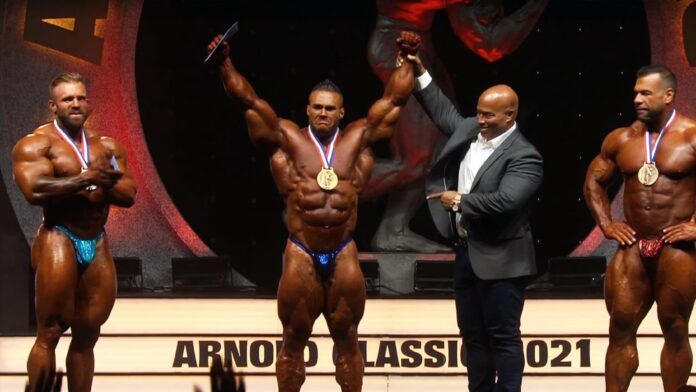 Nick Walker is your 19th Arnold Classic champion. On Saturday, Sept. 25, 2021, bodybuilding history was made in Columbus, OH. The Men’s Open bodybuilder won the prestigious 2021 Arnold Classic title after facing off with runner-up Iain Valliere in the final comparisons. Nick Walker is now the 19th winner, ever, in the contest’s 32-year history.

The winner of this contest won $130,000 and the final qualification for the 2021 Mr. Olympia, taking place Oct. 7-10 in Orlando, FL. The top six finishers for this contest are below.

*Both Nick Walker and Sergio Oliva Jr. — son of famed bodybuilder Sergio Oliva — won additional awards (and an extra $10,000). Oliva Jr. walked away with the Best Poser award for the second year, and Walker earned the Franco Columbu Most Muscular award.

Initially, there were 14 men scheduled to compete in this contest, but four withdrew leading up to the contest. Cedric McMillan was the first out due to injury. Lionel Beyeke faced travel restrictions in his home country of France. Then Roelly WInklaar had to bow out due to an undisclosed medical issue. Finally, defending champion and perennial Olympia contender William Bonac was unable to leave Abu Dhabi to travel due to quarantine restrictions.

That left 10 competitors to compete for this year’s championship. Here’s a breakdown of the top three Men’s Open competitors.

Walker improved his upper back significantly since the 2021 New York Pro, which he won in May. His conditioning was the best it has ever been.

As a result, he took the Most Muscular award and the Arnold Classic title. He now moves on to the 2021 Olympia to see if he can make it three for three.

Valliere was headed into this contest, hoping to set his own three-show win streak. The 2021 Tampa Pro and 2021 Texas Pro winner had to settle for the runner-up position. The Canadian, and brother-in-law to two-time Classic Physique Olympia winner Chris Bumstead, showed up in the best shape of his life, arguably. Still, Walker appeared a little better in terms of fullness and definition. Nonetheless, second at the Arnold Classic is no small feat.

“The Kingsnake” needed this win to qualify for the Olympia. His upper body was incredible from all sides. However, at 285 pounds, he didn’t appear as separated as Walker in prejudging.

This lack of separation was evident from the back, and Kuclo couldn’t make up ground during the finals. Judges had him solidly in third place this year. He will seek redemption in 2022. According to musclememory.com, Kuclo has eight career wins.

After the Arnold Classic was delayed due to the COVID-19 pandemic, the Arnold Sports Festival (ASF) announced that just the AC was returning for Sept.25, with limited divisions.

Even though it wasn’t the total Arnold Classic that fans are used to, there were contests in three other pro divisions this year. All three champions are now the first athletes to earn automatic qualification for the 2022 Olympia.

The last major show of the pro bodybuilding season is the 2021 Mr. Olympia. The Olympia weekend will take place from Oct. 7-10. with the actual competition taking place on the eighth and ninth.

Athletes are competing for a total of $1.6 million in total prize money. There will be a live stream available for fans over pay-per-view at olympiaproductions.com, starting at $49.95. 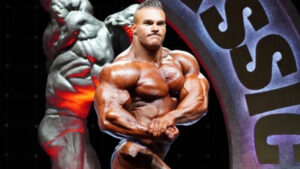