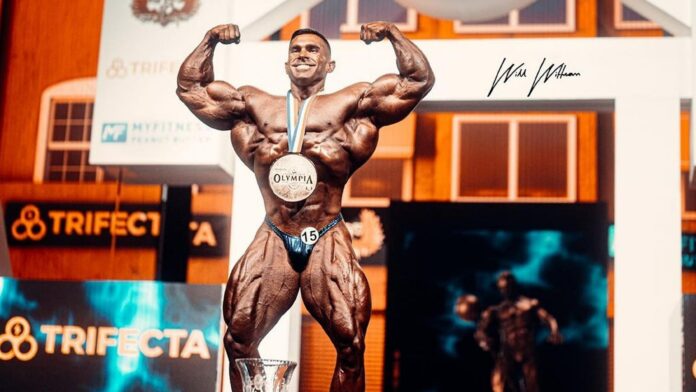 At the 2020 Olympia weekend, tears of joy streamed down Shaun Clarida‘s face as he was crowned the 212 Olympia champion after a hard-fought battle. The 2021 Olympia held Oct. 7-10, 2021, returned to Orlando, FL, and it appeared as though it was going to be another close battle for the title. Derek Lunsford did enough to claim the title from defending champion Shaun Clarida.

Clarida came back to the sunshine state to defend his title against one of the strongest rosters to date. It included 2019 212 Olympia champion Kamal Elgargni and Derek Lunsford, sporting a massive physique. Ultimately, Lunsford’s posing routine and significantly improved package — which is in part thanks to his new coach Hany Rambod — put him over the top to score his first win on the 212 Olympia stage.

Clarida, Elgargni, and Lunsford lept to the top of the field and received the final comparisons for the judges in the pre-judging. The three of them rotated spots and performed the same number of poses — for the side chest, they each posed to their presumed favored side all three times.

The Finals of the 212 Olympia featured the top 10 athletes after pre-judging. The callout featured the presumed top of the scorecard with Clarida, Lunsford, Elgargni, and Angel Calderon Frias. Clarida and Lunsford maintained the center of the stage and never swapped.

Callout number two included Ahmad Ashkanani, Kerrith Bajjo, TonioBurton, Nathan Epler, Naser Mohammed, and John Jewett. This was the second callout and likely a battle for the final spot in the top five. The judges did not ask for any of the athletes to trade places, and Epler and Ashkanani held the center. Ultimately, Epler slotted into the top five.

The third callout featured only Clarida and Lunsford in a head-to-head. They opened with a front double-biceps into a front lat spread. The broadcast team noted the weight discrepancy between the two men. Clarida hovers around 180 pounds on stage, and the larger Lunsford maxes out the 212-pound limit.

The judges swapped Lunsford’s and Clarida’s places, and both bodybuilders performed every pose an additional time. It seemed to be a battle between Lunsford’s size against the graininess of Clarida’s muscle. They hit their final poses — Lunsford in a front double-biceps and Clarida in a most muscular — and it seemed like either man was worthy of the title.

This is Lunsford’s fifth Olympia appearance and first win. He placed fifth in 2017, second in 2018, second again in 2019 (the year Elgargni won), and then fourth in 2020. Lunsford has been competing since 2015, according to NPC News Online.

Olympia Weekend runs from Oct. 7-10, with the pro competitions taking place on the eighth and ninth. Here’s the complete competition schedule: 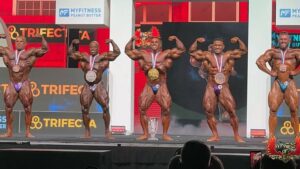