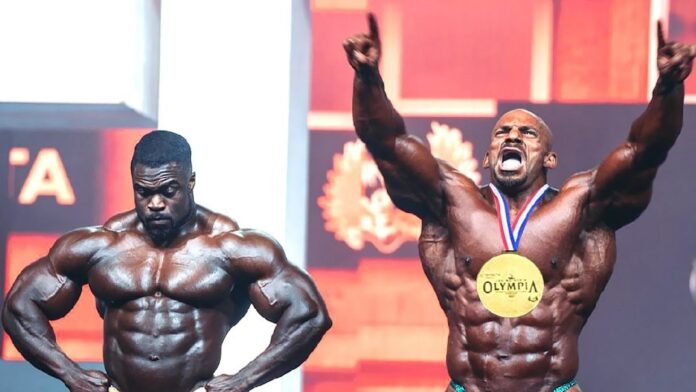 Your 2021 Mr. Olympia is Big Ramy. After a competitive round of pre-judging on Friday, Oct. 8 — which included solid showings from relative Olympia newcomers Hunter Labrada and Nick Walker — the judges seemed to favor Mamdouh “Big Ramy” Elssbiay and Brandon Curry. In the end, it was the defending champ who managed to hang onto the most prestigious title in bodybuilding. Since Elssbiay is a previous Olympia winner, the total count of Mr. O remains at 16. Ramy retains his title after a close battle with former Mr. O Brandon Curry.

Joe Wieder’s Olympia Fitness & Performance Weekend took place in Orlando, FL, from Oct. 7-10. It featured 11 divisions — including the debut of the Wellness Division — and there was $1.6 million on the line. 2019 Mr. Olympia Brandon Curry placed second, and “The Persian Wolf Hadi Choopan placed third. In total, the 2021 Mr. Olympia took home $400,000 in cash. Here is the entire top five:

On Saturday, Choopan, Big Ramy, and Curry took center stage for what was presumably the showdown of the top three. All three men presented an elite package with little to no error. The judges certainly had their work cut out for them.

The bodybuilder who hails from Egypt exploded onto the pro scene in 2013 by winning the New York Pro that year. Fans and the media marveled at his size — 5’11” and nearly 300 pounds on stage.  This is Elssbiay’s eighth Mr. Olympia appearance and 20th competitive bodybuilding show.

The rest of the Olympia was also action-packed. Derek Lunsford defeated defending champion Shaun Clarida to become the new 212 Olympia winner. Also of note, Francielle Mattos won the first-ever Wellness division. Missed some of the action? Here are the 10 other division winners:

Olympia Weekend ran from Oct. 7-10, with the pro competitions taking place on the eighth and ninth. The Mr. Olympia finals will wrap on Saturday. Here’s the complete competition schedule:

You can check the full Mr. Olympia history here! 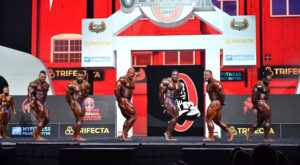