The 2022 Chicago Pro is one of the biggest shows of the year. It took place on Friday and Saturday, July 22-23, 2022 at the Tinley Convention Center in Tinley Park, IL.

Hunter Labrada did not return to the competition to defend his title, which means there would be a new champion crowned. Divisions for Men’s Open, 212 Bodybuilding, Classic Physique, Men’s Physique, Bikini, Women’s Bodybuilding, Figure, Fitness, Women’s Physique, and Wellness took place to earn an invitation to the 2022 Olympia this December.

Antoine Vaillant returned to the stage after a second-place finish during the 2022 Vancouver Pro last week. This was his ultimate return to the stage following heart issues that he has been dealing with. Vaillant has proven that he is a force when he is at his very best and earned himself a trip to the 2022 Mr. Olympia. Tim Budesheim and Dorian Haywood also came in with hopes of making an impact in the Men’s Open division.

During the finals on night one, Bo Lewis was crowned champion of 212 while JT Pelkey won Classic Physique to punch their tickets to the Olympia.

The first night of the results have been announced with six divisions handing out qualifications to the biggest show of the year. The 2022 Chicago Pro results wrapped up with several winners being crowned and earning invitations to the 2022 Olympia. Check out the full results from the event below and the official score cards.

The Chicago Pro has been a staple of the IFBB Pro League. Men’s Open Division at the Chicago Pro has produced iconic champion bodybuilders for over 34 years. The top three competitors this year earned a trip to Las Vegas, Nevada this December. 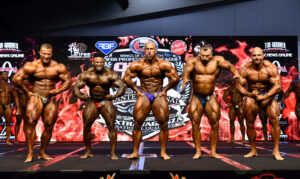 IFBNewsfeed.Org wishes to congratulate all the great athletes who earned a win at the 2022 IFBB Chicago Pro. Make sure to check out our full IFBB Pro results page from this year and previous years right here to catch up on any action you may have missed!

Facebook
Twitter
Pinterest
WhatsApp
Linkedin
ReddIt
Email
Previous articleOff The Limit Deal: Purchase IFBNewsfeed.Org Merchandise Here, “Get 50% Off Discounts To All Our Deals In The Future” And Support The Fitness / Bodybuilding Community
Next articleSimplify “Muscle Development, Muscle Growth, And Muscle Density” By Simplifying Your Entire Workouts