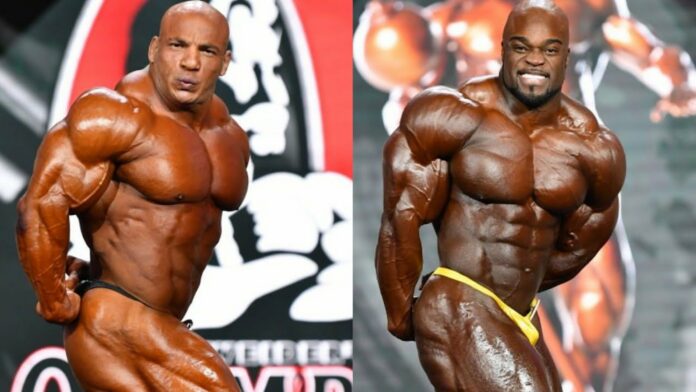 Eleven professional divisions are being contested at the 2021 Olympia Weekend in Orlando, FL. The main event is the Mr. Olympia itself. The Men’s Open pre-judging went down on Oct. 8 in the Orange County Convention Center. Sixteen men took to the stage with hopes of being crowned Mr. Olympia. After six rounds of comparisons, Big Ramy and Brandon Curry were the clear front-runners head into the finals.

The defending champion is Mamdouh “Big Ramy” Elssbiay, and he weighed in at 305 pounds before this contest (wearing a full suit and shoes). Among those facing him are 2019 Mr. Olympia winner Brandon Curry and 2021 Arnold Classic Champion Nick Walker. There is also former People’s Champion winner Hadi Choopan. Elssbiay’s road to a second title will not be an easy one to travel, but he appears utterly confident that he’ll repeat.

The crowd watched each round with anticipation from the opening moments. Walke’s energy immediately amped up the crowd. The applause continued for former two-time Arnold Classic winner William Bonac.

There was rousing applause for Curry when he came out, too. The 15th Mr. Olympia stepped on stage sporting improved legs, very large arms, and a tight — very tight — waist. Once Curry finished his routine, everyone was waiting for “winter to come” with the arrival of the defending champion.

Elssbiay strutted to center stage, sporting a goatee, and every eye in the building focused on his every pose. Fans were moving closer to the front to get pics of Mr. Olympia as he was performing the mandatories. The bass of the music shook the room, coincidentally timed with every shot he hit.

After the introductions and numerical callouts, the anticipation climaxed with the first callouts of pre-judging. Rivaling chants of “Ramy,” “Curry,” and “Walker” echoed throughout the room. The last two champions would be in the center of the first callout; Walker, Choopan, Hunter Labrada, and Bonac joined them.

Akim Williams, Mohamed Shaaban, Iain Valliere, Roelly Winklaar, Justin Rodriguez, and James Hollingshead made the second callout. They would be moved around repeatedly by the judges.

Callouts five and six were arguably the most interesting. Except for Curry and Big Ramy, everyone in callout one (plus Rodriguez and Valliere) lined up for callout number five. After the fifth callout, head IFBB Pro League judge Steve Weinberger had the 15th and 16th Mr. Os run back their mandatory poses. It’s safe to assume that they’re battling for the top spot. However, commentator and legendary bodybuilder Shawn Ray noted that Hadi Choopan brought an incredible package to the competition during the broadcast.

Olympia Weekend runs from Oct. 7-10, with the pro competitions taking place on the eighth and ninth. The Mr. Olympia finals will wrap on Saturday. Here’s the complete competition schedule: 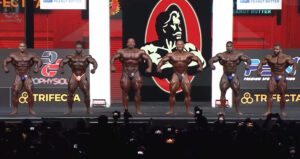