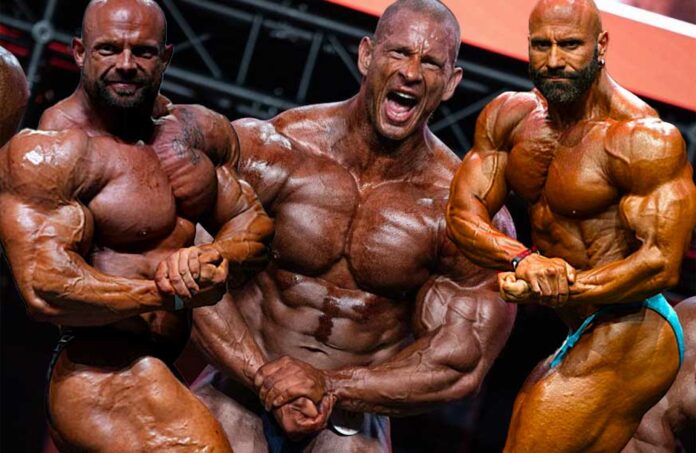 Michal “Krizo” Krizanek was considered an NPC amateur bodybuilder at the beginning of October 2022. Less than one month later, he is an Olympia-qualified pro. The former IFBB Elite Pro champion is moving on to the 2022 Olympia.

Michal “Krizo” Krizanek placed first in the 2022 Prague Pro in Prague, Czech Republic, to win his pro debut and is now set to stand alongside the best in the IFBB Pro League on the Mr. Olympia stage.

The top six finishers for the contest are below. IFBNewsfeed.Org will update these standings to include the top 10 when those scores are shared.

Below is a breakdown of the podium results.

Michal “Krizo” Krizanek was ripped from top to bottom, and his legs were impressive from all sides. His definition and experience from past competitions paid off here, as he was the clear winner when they announced the first callouts in prejudging.

Now, Michal “Krizo” Krizanek will have his opportunity to stand alongside two-time reigning Mr. Olympia Mamdouh “Big Ramy” Elssbiay, 2019 Mr. Olympia Brandon Curry, and the rest of the men’s open lineup when they face off at the 2022 Olympia Weekend on Dec. 16-18 in Las Vegas, NV.

This was Turek’s best placing as a pro thus far in his career. Turek looked great, but Krizanek had the size advantage, which was too much for him to overcome. He represented himself well here and could potentially jump in another show before the season cutoff date of November 20, 2022, if he wanted to qualify for the Olympia.

Bela had a lot of supporters in the crowd, and for good reason. He showed a lot of muscle density and had great posing. As with Turek, Krizanek was too impressive to be denied on this particular weekend. Bela could be a player to watch in 2023 because he showed he had the physique and potential to hold his own in a big-time lineup.

Six IFBB Pro League divisions were on display at this contest, and the final standings as of this writing are below. All winners will move on to the Olympia, while the second through fifth-place finishers earn Tier 4 points in the Olympia Qualification System.

IFBNewsfeed.Org wishes to congratulate all the great athletes who earned a win at the 2022 Prague Pro. Make sure to check out our full IFBB Pro results page from this year and previous years right here to catch up on any action you may have missed!

Facebook
Twitter
Pinterest
WhatsApp
Linkedin
ReddIt
Email
Previous article
3 Reasons Why “Staying Lean For Muscle Growth” Is Smart Move, Especially When We Focus On Health
Next article
Creatine For Women: Should You Take It? Here Are “The Myths Versus Facts” You Should Know Before Taking Creatine