Who will be the next athlete to qualify for the 2021 Mr. Olympia by winning IFBB Pro California show?

So far in May, there have been two bodybuilding shows to kick off the 2021 season. Justin Rodriguez snagged the opening show in Indianapolis, and rising star Nick Walker took the New York Pro title. As of this writing, there are currently nine men qualified to compete at the 2021 Mr. Olympia contest in Orlando, FL, from October 7-10.

The 10th competitor on that prestigious lineup will be determined in Anaheim, CA, at the California Pro contest on Saturday, May 29, 2021. So far, we know that 10 athletes are preparing to compete in this showdown. Any athlete can show up at a contest and pull off a victory, but the four men below, we think, should be considered the favorites as they prepare to take the stage. First, here’s the complete competitor list:

The man is known as “The Future” actually won this contest in 2019, which was quite an upset at the time. He would go on to place 10th at the Olympia that season. However, the 2020 season didn’t go as Moore hoped. After placing 13th at the Arnold Classic, he placed fourth at the 2020 California Pro and then sixth at the New York Pro. He would go on to take an extended offseason to add muscle mass. Moore seems to be on the hunt for redemption, and what better place to find it than the show he took his first victory in? He appears bigger in recent posts on social media. If Moore can nail his conditioning and maintain his size and fullness, he’s a likely podium finisher. 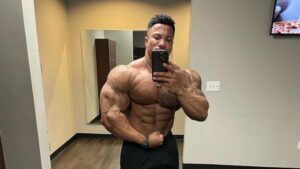 [Related: What to Know About Strength Training For Bodybuilders]

Mostafa placed third in New York in 2021. While the man from Egypt didn’t get the result he wanted, he learned from the experience and walked away with more motivation. Of course, motivation isn’t enough. Notably, Mostafa works with nutritionist Chris Aceto, and the duo says they know how to maximize Mostafa’s potential. If Mostafa can peak during the pre-judging portion of the show and then hold that conditioning for the finals, he may find himself contending for a Sandow in October.

El Amem had already competed in both Men’s Open qualifier shows so far this season. He took second place to Rodriguez in Indianapolis and finished in fifth at the New York Pro. El Amem can benefit from this show in two ways. Of course, he can win the contest and the Olympia qualification that comes with it. If he doesn’t win, however, a top-five finish adds to his points on the Olympia scoring system. The top three in that system also qualify for the Olympia. The points would certainly help his cause for moving on to the big stage. His big shoulders are among his best body parts, and they will stand out in this lineup.

Fred “Biggie” Smalls is making his return to the stage after a three-year absence. His last competition was the 2018 Indy Pro, where he placed ninth. Aside from being one of the most entertaining posers in bodybuilding, he has been in the mix at several big contests. He won the 2015 Dallas Pro and has been to Olympia three times. It wouldn’t be a surprise to see him competing for the win in Anaheim.

[The Best Supplements for Bodybuilding]

Contests Yet to Come

The season is far from over. Aside from the California Pro event, here are the Men’s Open shows on the schedule as of this writing. There are scheduled contests taking place after the Spain event, but any show after Sept. 12 qualifies athletes for the 2022 Olympia. The Europa Pro will be the last chance to dance in Orlando, Florida this year. 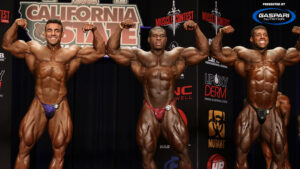 IFBB Indy Professional 2021 Results. We Have A New Champion: “IFBB...