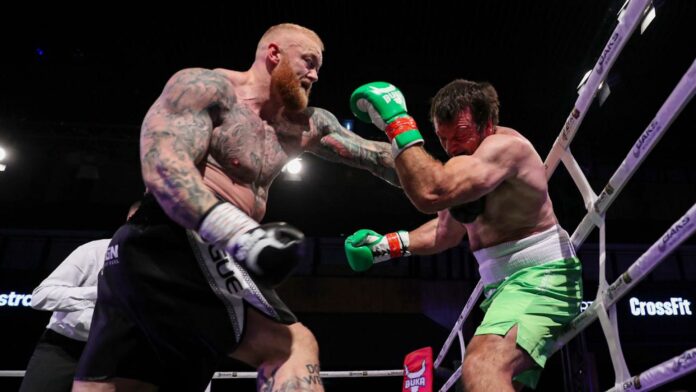 Hafthor “The Mountain” Björnsson has won his first professional boxing match. On Sept. 18, 2021, Hafthor Björnsson advanced his professional boxing record to 1-0 after defeating Devon Larratt via a first-round technical knockout. The bout was the main event of Fight Night 3 presented by CoreSports. The 2018 World’s Strongest Man champion ousted Larratt in the first round in Dubai.

To sum up the bout, Thor’s year and a half of training greatly overshadowed Larratt’s six weeks of preparation. It was a courageous showing from Larratt, but Björnsson’s size, training experience, and comfort level in the ring gave him the clear upper hand.

The Round One (And Only) Breakdown

From the onset, both fighters’ size was apparent, and they met in the center of the ring swinging. After throwing a few punches each, Björnsson and Larratt locked up and tumbled into the ropes within seconds.

Larratt was the first to land a solid punch, connecting a right hook to the head of Björnsson about 30 seconds into the round. However, Thor absorbed the punch well and looked unfazed. After the early showing by Larratt, Björnsson took control of the match, immediately responding with a strong punch to the head of Larratt.

While Larratt’s courage was on full display, his balance was clearly his weakest link. The champion arm wrestler ducked a left-handed punch from Björnsson, but fell back into the ropes, causing the official to call for a pause as he checked Larratt.

Thor commanded the center of the ring after fighting allowed to resume, with Larratt skirting along the edges. Larratt never fought defensively, consistently leaning into Björnsson’s punches as well as his own.

As the final minute set in, Björnsson landed more punches, wearing Larratt down. Larratt fought back, accenting his punches with audible shouts. But Thor was dialed into his opponent, and after landing a few more blows as the 30-second mark was crossed, the referee called the match for Björnsson.

Björnsson was the odds-on favorite heading into the fight. After all, he trained exclusively for a year and a half as a boxer to fight 2017 WSM champion Eddie Hall. However, a biceps injury compelled Hall to pull out of the fight, and Larratt was tapped as his replacement with only six weeks to prepare.

There was speculation by the commentators about how well Björnsson’s training would apply to Larratt, and that perhaps there was a surprise to be had in the match. But the upset was not to be for Larratt as Björnsson’s training advantage was evident throughout the fight.

Forward to Björnsson vs. Hall

After the fight, Thor called out Hall in his post-match interview, stating:

Enjoy your life, buddy. I’m going to knock you out soon.

The bout between Björnsson and Hall — marketed as “The Heaviest Boxing Match in History” — is expected to occur in early 2022. Current speculation is that Hall will fully recover from his biceps surgery and be medically cleared to enter the ring by March 2022. No specific date or location has yet been announced, nor have the fights that will be featured on the undercard.

Björnsson’s bout against Larratt marks the third time he has stepped in the boxing ring outside of training. His first two bouts were exhibition fights against Steven Ward and Simon Vallily.

Hall has not participated in any exhibition fights, stating on his YouTube channel that he does not intend to. We’ll see, come 2022, if Björnsson can continue his newfound winning streak by wrangling “The Beast” or if Hall’s first trip back to the squared circle will involve a toppling of “The Mountain.” 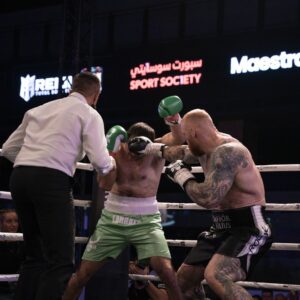 Facebook
Twitter
Pinterest
WhatsApp
Linkedin
ReddIt
Email
Previous article
Personalized Advice: “How To Prevent And Treat High Blood Pressure With Exercise”
Next article
Here Is “The The Best Time Of Day To Take Vitamin D”, According To Experts