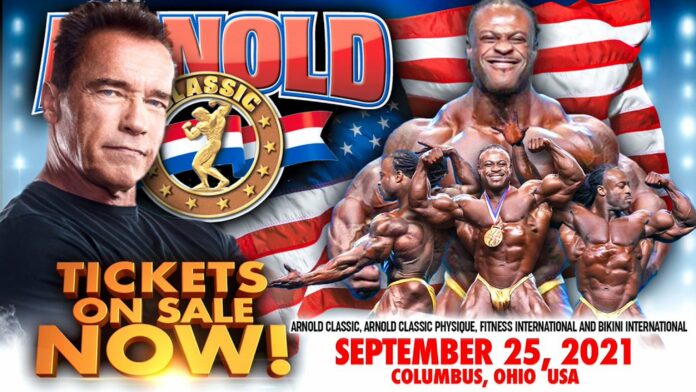 Less than two weeks before one of bodybuilding’s most prestigious shows kicks off, information on how to watch the 2021 Arnold Classic is now available. You can travel to Ohio and watch it in person for those wanting to see the show live. Otherwise, the Arnold Sports Festival is providing a webcast for fans that are staying home. Whether you are in Columbus or at home, here is what you need to know about the 2021 Arnold Classic.

The AC will occur in Columbus, OH — the only place it has taken place in the show’s 32-year history — on Sept. 25. Typically, the AC, along with the Arnold Sports Festival fan expo, Arnold Strongman Classic, and numerous other sporting events, happen in March. Due to the COVID-19 pandemic, however, the event was condensed and delayed.

The webcast will be available on the ASF website — free of charge. Prejudging is scheduled to take place on Sept. 25 at 10 a.m. EST with the Finals webcast starting at 6:30 p.m. local time. The complete commentary team isn’t officially known as of this writing, but 2017 Arnold Classic Champion Cedric McMillan and Arnold Schwarzenegger will be involved in some capacity.

Athletes to Watch at the 2021 Arnold Classic

The 2021 Arnold Classic will feature four divisions — Men’s Open, Classic Physique, Bikini, and the dynamic Fitness division. In total, 42 athletes will take the stage at the Arnold. For comparison, the 2020 Arnold Classic featured eight divisions: the same four competing in 2021 plus Men’s Physique, Figure, Women’s Physique, and Pro Wheelchair.

Below, you’ll find the full roster for each division, three notable athletes, and a little information on each.

[Related: How Bodybuilders Cut Weight While Holding Onto Muscle]

Fans watching in attendance and online will see four competitions take place. The main event is the traditional Men’s Open contest. The lineup initially had 14 contenders, but two are no longer in the lineup. McMillan withdrew due to an undisclosed injury, and Lionel Beyeke cannot travel to the United States from France. That leaves 12 men competing for the title.

As the defending champion, Bonac should step on stage confidently and comfortably. He has, after all, won the Arnold Classic twice — once in 2018 and again in 2020. Bonac is also a seven-time Mr. Olympia athlete, competing in every O from 2014 on. His highest Olympia placing came in 2019 when he took second to winner Brandon Curry.

Valliere is two for two in 2021, having won both the Tampa Pro and Texas Pro. He comes in with the most momentum. The Canadian’s biggest challenge, however, is holding his shape after peaking twice already.

Save up to 70% on Vitamins & Supplements at eVitamins.com!

As for Kuclo, the Texan’s advantage will be that he’s most likely the largest competitor in the lineup. His lengthy resume spans well over 20 shows since 2011, including six Olympia appearances. The 5’11”, 290-pound placed second behind Valliere at the Texas Pro win, and Bonac has placed ahead of him every time they have stepped on the Arnold Classic stage. That said, if either man is off, he will be there to take their spots.

[Related: What You Need to Know About Strength Training for Bodybuilders]

This division has many people supporting it, so the crowd may be as loud for this show as they will be for the Open. 10 athletes will pose down in this division’s show.

Cambronero won this contest in 2020. If he wins again, he’ll be the first Classic Physique champion to repeat if he were to win again this year. Cambronero is also coming off a fourth-place finish at the 2020 Olympia, which is impressive considering how competitive the division is. Before being a Classic Physique competitor, Cambronero competed in the 212 division, racking up one pro win and an Olympia appearance (2018) before switching to Classic Physique. He’s also won the 2019 Pittsburgh Pro.

Ruffin vaulted up in the division thanks to his runner-up finish to Chris Bumstead at the 2020 Olympia, which means he beat Cambronero, who finished in fourth place. Ruffin, who also logged a second-place finish at the 2020 Arnold Classic, will have to defeat Cambronero once more.

Then there is Opara, who has finished in the top three of this contest two years in a row. He didn’t compete in the Olympia, so he’s had a long offseason to improve. If he made the most out of that time, then he can be considered for the win.

[Related: How to Train and Diet for Natural Bodybuilding]

There are two women’s contests taking place in Columbus, and they are both very competitive. The Bikini International show has 10 ladies that will vie for this year’s title, including the defending champion.

Like Bonac and Cambronero, Elisa Pecini is looking to repeat this year. She is also a past Bikini Olympia winner (2019). Despite coming off a sixth-place finish at the 2020 Olympia, she has a solid shot at gold this year if she can mentally put that loss behind her. Pecini has placed in the top three of 10 pro shows since 2017, with five of those being first-place finishes.

The lineup she faces is stacked, including another former champion in Kaltwasser. The two contenders that may make the most significant impact are both Canadians. Dorie was last year’s Olympia runner-up, while Chapados won the 2021 Chicago Pro earlier this year.

The most entertaining contest to watch will arguably be the Fitness division. The athletes will showcase world-class physiques in the first round. That evening, they will perform routines that will captivate the crowd and fans watching the webcast.

All three of these athletes are former Olympia and Fitness International winners. Truscott is the current holder of both titles. She beat both Grishina and Jones at last year’s Olympia, and placed second at the 2019 Olympia.

Grishina is a legend in the Fitness division, racking up 13 wins between 2011-2017, before taking a few years off from the competition. She then came out of retirement in 2020 and placed second to Truscott in Orlando.

Whitney Jones is looking for redemption after placing third in the Olympia to Truscott and Grishina. She won the 2018 and 2019 Mr. Olympia and 2018 Figure International competitions.

This group will likely be the top three at the end, but the order can go any way. The only certainty is that all three will push each other and their competitors to the limits.

Anyone interested in purchasing tickets for the 2021 Arnold Classic checks out the ASF ticket page. 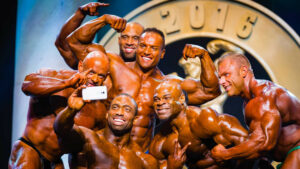