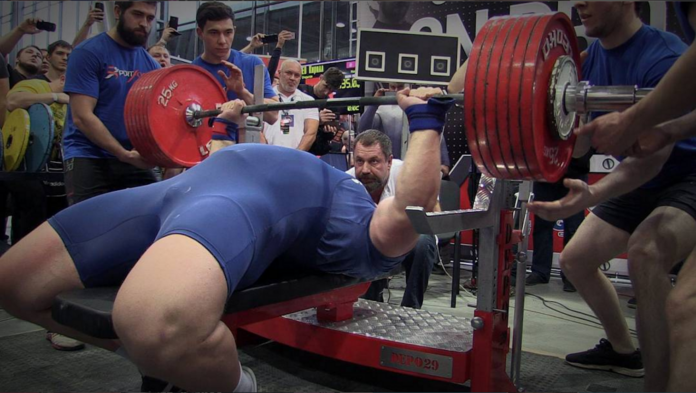 Powerlifter Andrew Cooper Bench Presses Australian Raw Record Of 306.5 Kilograms
Cooper’s body weight at the time of his Australian raw record bench press was 147.1 kilograms (324.3 pounds). That means the lift was just over twice his body weight. At the AusPL Strength Quest, Cooper made three attempts — the Australian record was scored on the third:

Cooper competed only in the bench press at the 2021 AusPL Strength Quest — he did not attempt a squat or deadlift. Officially, he competed in the Masters 40-44 division (he was 43 at the time of the contest). Check out Cooper’s lift below, courtesy of the video on his coach, Thomas Lilley’s, Instagram page.

Save up to 70% on Vitamins & Supplements at eVitamins.com!

In terms of how Cooper’s lift stacks up against the other heaviest raw bench presses ever, Julius Maddox has a clear hold on the raw world record currently set at 355 kilograms (782.6 pounds). Before that, he set the record at 350 kilograms (771.6 pounds) in March 2020 and initially broke Kirill Sarychev‘s world record of 335 kilograms (738.6 pounds) in November 2019 with a 337.5-kilogram (744.1-pound) lift. Here are the top three raw bench presses in competition by different athletes, according to Open Powerlifting:

Maddox is set to square off against Iran’s Danial Zamani in a bench press contest at Iron Wars V on Jan. 24, 2022, at the Iron Addicts Gym in Signal Hill, CA. Although not confirmed, it is possible that Maddox and/or Zamani could attempt a 362.9-kilogram (800-pound) bench press at that contest.

According to Open Powerlifting, Cooper has competed in five sanctioned powerlifting meets and has a perfect record, earning gold in all five events. He made his competitive debut in the 140-kilogram class at age 41 at the 2020 CAPO Queensland Push-Pull. That was the only event where he logged a deadlift — his heaviest pull being 300 kilograms (661.4 pounds).

Since then, Cooper has only competed in the +140-kilogram class and exclusively in bench-press-only contests:

Even at age 43, Cooper shows no signs of slowing down as his bench press improves with each sanctioned event he enters. Since his debut in 2020, he has added 34 kilograms (75 pounds) to his bench press — a rather impressive jump in only a year and a half. It’s not clear when he will compete next, but hopefully, he’ll make another attempt to move up the all-time raw bench press leaderboard when he does.

Free Shipping on US orders over $49 USD and 5 lbs or less at eVitamins.com! 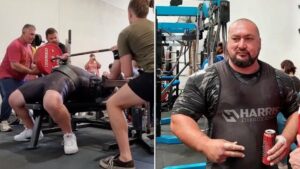 Facebook
Twitter
Pinterest
WhatsApp
Linkedin
ReddIt
Email
Previous article
Here Are The “10 Greatest Bodybuilders” To Never Win A Mr. Olympia Title
Next article
How To Watch “The 2021 Arnold Classic” And The Athletes You Must Keep Your Eyes On