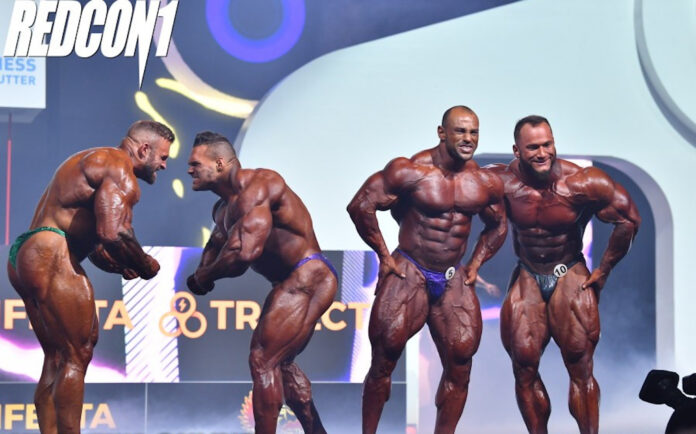 Saturday night at the Olympia is the biggest night of the year in bodybuilding, and the 2021 edition is no exception. With $1.6 million on the line, athletes in all 11 divisions put it all on the line between Oct. 8-9, 2021, during the pre-judging and finals. The biggest weekend in bodybuilding is underway and finishing in grand fashion.

The Orange County Convention Center in Orlando, Florida, was sold out for the final night of the 2021 Olympia Weekend. The Classic Physique, Men’s Physique, Bikini, and Mr. Olympia Finals were on the docket for the evening.

Brandon Hendrickson didn’t want to repeat his performance in 2019 — he went in as the champ, but he lost the title to Raymont Edmonds. Hendrickson then reclaimed Olympia gold in 2020 Orlando, and fans wondered if he’d hang onto the title or volley it to another Men’s Physique competitor.

Based on pre-judging, Kyron Holden, who showed up in his best shape ever, was Hendrickson’s biggest concern. The judges made sure to work both men several times earlier in the day. It was now up to the defending champion to close the door and take the gold medal. And so he did. In dramatic fashion by emcee Bob Ciccarello, it was announced that Brandon Hendrickson took the crown for the third time in his career.

Two-time winner Chris Bumstead is very familiar with his top two opponents this year. He and Breon Ansley have won the last four Classic Physique Olympias, with Bumstead taking the last two. He beat Terrence Ruffin last year to win the title, but Ruffin, who won the Arnold Classic Physique title last month in Columbus, OH, came ready for battle.

After the callouts, the top five performed their routines. Bumstead came out to the same music that the 1990’s Chicago Bulls used during their introductions. Perhaps the champion was indicating that he would create his dynasty in the Classic division. After the traditional posedown, awards were announced.

Chris Bumstead won the title for the third year in a row. In his victory speech, Bumstead elaborated on his emotions during his preparation and expressed gratitude for pushing through to see the big moment. He also spoke about the unexpected death of George Peterson.

“The first two times I’ve ever stepped on stage were with George Peterson. He was always smiling, always humble, always grateful, and always happy to be here,” Bumstead said. “I tried to keep his spirit in my heart all weekend. I think we can all learn to have that attitude and just be present and grateful and happy with wherever we’re at.”

With 2020 Bikini Olympia champion Janet Layug out of this year’s competition, the door was open for a new champion. On the morning of Saturday, Oct. 9, it appeared to be a three-way contest between the 2020 runner-up, Jennifer Dorie, former Olympia winner Ashley Kaltwasser, and Lauralie Chapados.

All three ladies took turns in the center of the final callout during pre-judging. Head judge Sandy Williamson even complimented them on how difficult the decision would be to determine the winner. The Finals confirmed that the top three in pre-judging would be the top three at the end of the night.

Fans were guaranteed to hear Bob Ciccherillo say “and new,” but the question was whose name was to follow. Canada scored their second Olympia champion of the night. As a matter of fact, the top two finishers were both Canadians. Layug would join other presenters to take the 2021 trophy and gold medal to Jennifer Dorie. Chapados finishes in the silver position.

The last two Mr. Olympia champions were the last two men standing in the pre-judging on the evening of Oct. 8. The Mr. Olympia is a two-night show, so Mamdouh “Big Ramy” Elssbiay and Brandon Curry had 24 hours to think about how the judges would decide the winner. Holding such a tight level of condition overnight is no easy challenge, especially considering that two-time People’s Champ Hadi Choopan — renowned for his shreds — was hot on their tails.

The confirmation round began with Curry, Elssbiay, and Choopan at center stage in that order. Rivaling chants of “Ramy,” “Curry,” and “Hadi” echoed throughout the building. The second callout centered around Walker and Hunter Labrada, with Iain Valliere and William Bonac on either side.

The climax of the Mr. Olympia would be either Elssbiay repeating or Curry making bodybuilding history. After a very dramatic wait, the presenters, joined by Cutler, gave the first-place awards to Elssbiay. He becomes the first man since Phil Heath to repeat as champion. Curry finishes as the runner-up for the second straight year.

The Rest of the Results

The Olympia has been somewhat unpredictable this year. Many returning champions were anticipated to have successful defenses on the Olympia stage and lived up to expectations. Cydney Gillon defended her title for a fifth time, as did now two-time Ms. Olympia champion Andrea Shaw.

However, there were also surprises, including Derek Lunsford beating out Shaun Clarida in the 212 Division and Whitney Jones reclaiming the Fitness Olympia championship. Here are the results from every division not listed above: 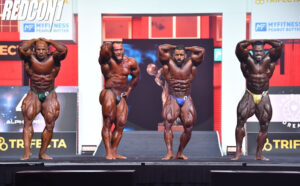