Bodybuilder George Peterson has died just days before competing at the 2021 Mr. Olympia according to sources close to Generation Iron and multiple outlets reporting. He was only 37 years old. Peterson was currently stationed in Orlando, Florida to compete in the Men’s 212 Olympia. Bodybuilder George Peterson has passed away in his hotel room on Oct. 6, 2021 ahead of the 2021 Olympia.

Early reports claim that coach Justin Miller was not receiving responses from Peterson, who was in his hotel room. After some time of no response – Miller called in security to open Peterson’s hotel room where he was found face down and unresponsive. After dialing 911, Miller started to perform chest compressions until security took over and attempted CPR. According to Miller, the EMTs and emergency personnel confirmed Peterson passed hours earlier.

At the time of this writing, no other official announcement or statement has been made. Nor has there been a confirmed cause of death. Many have begun posting on social media of the news as well as other sports outlets. Generation Iron has reached out to George Peterson’s coach Justin Miller – but have not yet received any official confirmation at this time.

A native of New York, also known as “Da Bull,” George Peterson was a bodybuilder with an incredible physique and an equally incredible journey throughout his bodybuilding career. Peterson started bodybuilding over 10 years ago, took a 5-year break, and then returned to the newly minted Classic Physique division. Peterson competed in the 2017 Tampa Pro where he placed third in Classic Physique. He later entered the 2018 Olympia where he placed third. He ultimately when on to win the 2019 Arnold Classic Physique contest. Peterson eventually changed things up and bumped up to the Men’s 212 division. His Men’s 212 debut was in 2020 where he went on to win the 2020 Tampa Pro and place third at the 2020 Olympia.

Generation Iron was lucky enough to connect and recently conduct a full length video interview with George Peterson. We covered his entire career in bodybuilding, his journey through multiple divisions, his thoughts on the current state of bodybuilding, and more.

Beyond his physique, George Peterson was also known for his humble attitude and positive demeanor. He was not only a beloved bodybuilder – but a beloved man to friends, family, and those in the bodybuilding community lucky enough to have met him.

George Peterson’s death comes after a string of other passings that have tragically hit the bodybuilding industry. While no cause of death has been confirmed, Peterson is the second bodybuilder to pass away just before being set to compete in a competition.

IFBNewsfeed.Org sends condolences to the friends and family of George Peterson at this time. He was an uplifting, intelligent, and passionate individual – and an extremely talented bodybuilder. The bodybuilding world mourns his passing.

Sad news from Orlando, FL, as 212 Division superstar George “Da Bull” Peterson has passed away on October 6th at the age of 37. The Olympia has confirmed Peterson’s death within the last few hours. No cause of death was revealed and no details of an autopsy has been shared at this time.

Peterson was in the final stages of preparing to make his fifth straight Olympia appearances. Going into this season, he had competed in the Classic Physique division three times and the 212 Olympia Showdown once. He finished in third place all four times. He was considered a favorite to win the competition this year.

Peterson has competed professionally since winning the NPC Nationals in 2016 as a Classic Bodybuilding competitor. He has won the Tampa Pro twice (once in Classic, once in 212), and was the 2019 Arnold Classic Physique Champion.

Tributes and comments from around the bodybuilding world has been pouring in ever since the news of Peterson’s death broke.

“It is with great sadness that we report the unexpected passing of George Peterson, a champion on stage and off. Our condolences go out to his family and all who respected and admired one of the kindest men we have ever known.” – Mr. Olympia LLC

“Our entire team at the Arnold Sports Festival is profoundly saddened to learn of the passing of professional bodybuilder George Peterson. We would like to extend our deepest condolences to his family, friends, and fellow competitors during this incredibly difficult time.” – Arnold Sports Festival

“I’m in shock George was an absolute legend. I was always grateful to share the stage with such a great man🙏🏼❤️” – Chris Bumstead, Classic Physique Olympia Champion

“Absolutely in shock by this. Such a great guy gone too soon. My prayers go out to his close friends and family during this rough time. We’ll miss ya champ!” – Shaun Clarida, 212 Olympia Champion

“I’m in shock over this heartbreaking news. George was such a sweetheart. My heart goes out to his family, friends and fans. He will truly be missed.” – Isabelle Turell, Fit Rockstar Show Host

Everyone at IFBNewsfeed.Org sends their thoughts and condolences to Peterson’s loved ones and fans. 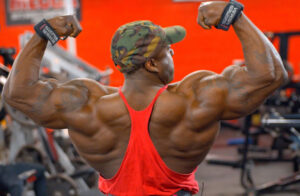 IFBNewsfeed.Org will continue to update this story as more information becomes available – such as official confirmation of Peterson’s passing. Stay tuned to IFBNewsfeed.Org for more updates.