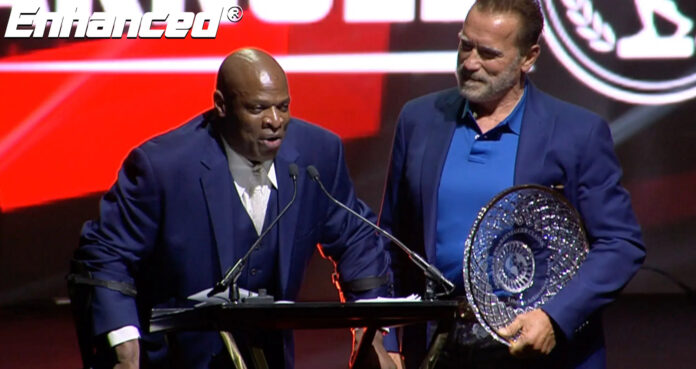 Each year at the Arnold Classic, an individual in the bodybuilding and fitness industry is selected for the lifetime achievement award. This award is to commemorate an individual who contributed to the sport of bodybuilding throughout their life and career. During the Arnold Classic 2021 finals broadcast, Ronnie Coleman received the lifetime achievement award. Ronnie Coleman was recognized for his dominance in bodybuilding and incredible legacy.

Presented by Arnold Schwarzenegger himself, it was spectacular to see two massive legends of bodybuilding share the stage together. The announcement came during the Arnold Classic 2021 finals and included a special video segment recapping his life, career, and legacy. Ronnie Coleman requires truly no introduction – best known as one of only two 8x Mr. Olympia champions. The most Olympia victories in the history of the sport only tied by Lee Haney.

Beyond his record-setting eight Mr. Olympia wins, Ronnie Coleman is a bodybuilding icon. He single-handedly changed the entire direction of the sport. His massive frame and insane conditioning redefined the term “mass monster.” Ever since Coleman’s reign in pro bodybuilding – each following generation of competitors have tried to chase that massive size. Coleman raised the bar and changed what was possible with the human body.

Ronnie Coleman’s journey was chronicled in the 2018 documentary film – Ronnie Coleman: The King. It followed his childhood, bodybuilding rise to success, and life post-retirement. More specifically, he tracked his post-retirement injuries and surgeries – including multiple spinal and hip surgeries. Due to his intense training and massive size, he has suffered many complications in his later life. Despite this, he has repeatedly claimed to have no regrets.

Upon receiving the Arnold Classic Lifetime Achievement Award, Ronnie Coleman thanked his wife and eight kids. He also thanked his mother – and became slightly teary-eyed upon reflecting on the love and support he received from his mother, wife, and family. He also recounted his multiple surgeries post-retirement – confidently claiming, “I’m still here.” He also stated that, in his opinion, the Arnold Classic is the greatest bodybuilding competition in the world.

“This is one of the greatest awards I’ve ever received,” Ronnie Coleman stated at the end of his speech. This includes his eight Mr. Olympia titles. He then quickly became emotional again, gasping for air as he teared up. A truly exceptional moment fitting for one of the most successful, legendary, and talented pro bodybuilders ever in the history of the sport.

“Momma, we got ourselves a lifetime achievement award,” he uttered finally. There will perhaps never again be a bodybuilder as significant as Ronnie Coleman. The Arnold Classic Lifetime Achievement Award was long overdue. 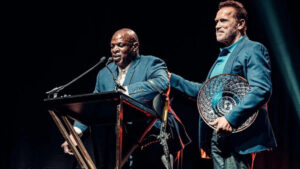