We have the science. We sifted through the data of three electromyography (EMG) studies to determine precisely which exercises do the best job of activating your pectorals, which do an okay job, and which you should modify or avoid. The results may surprise you—or maybe not.

The interesting thing about pecs is, unlike some other muscles, the highest standards haven’t changed much over the past half-century. The chests of Arnold Schwarzenegger and Franco Columbu in the ’70s seen above would still wow on the Olympia stage today. That’s because everyone did barbell bench presses then, while too many champs avoid them today. (One big exception from the recent past was 8-time Mr. Olympia Ronnie Coleman who typically did nothing but flat, incline, and decline presses for chest—barbells one workout and dumbbells the next.) But the story is more complicated than just “do free-weight basics,” because when it comes to flying, machines are superior. Let’s dive deep into the science of chest training.

☑️ “Horizontal plane. Because the bar is going up or down in a straight (or nearly straight) line, you’re battling gravity from start to finish”.

☑️ “Peak tension. Tension is not maximized on the pecs from start to finish (the front delts and triceps do work). However, in the mid-range of reps, the tension is very high in comparison to other chest exercises”.

☑️ “Maximum resistance. This barbell standard allows you to stress your chest with the greatest free-weight loads. These heavier weights also allow you to more frequently add resistance for the same reps (it’s much easier to go from 300 to 305 than 30 to 35)”.

As for the angle of the incline or decline press, one of the studies mentioned above determined that 45-degrees was better than 25-degrees for focusing on either the upper pecs (with an incline press) or lower pecs (with a decline press). But yet another study looked at chest activation during flat, 30-degree incline, 45-degree incline, and 15-degree decline barbell presses. It confirmed that incline worked upper more and decline worked lower more, but upper pec stimulation was virtually identical with either 30 or 45 degrees. However, 30 did a better job of also stressing the middle pecs, making 45 degree inclines more upper-centric but 30 degrees a better overall chest exercise. 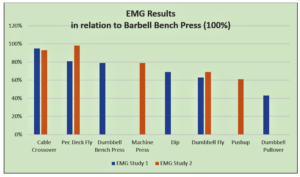 Just barely behind barbell presses are machine fly exercises, specifically cable crossovers and pec deck flyes. As we discussed in our biceps exercise article, gravity always rules. A weight is always pulling straight down, so anytime it’s not traveling straight up (as during a free-weight curl or fly or lateral) tension is lost. So, dumbbell flyes don’t rate well as chest exercises despite the fact that pulling the arms closer together is a pure pectoral motion. However, when you do a fly with a weight stack or stacks (crossover, pec deck, etc.) the weight travels only horizontal, keeping tension on the pecs from stretch to contraction.

Unlike barbell presses, this is one place where Arnold and company got it wrong. They did a lot of dumbbell flyes and often thought of cable crossovers and pec-deck flyes as “sculpting” exercises to etch in striations pre-contest. Forget that. Stop thinking of free-weight as hardcore and machines as the softer core. Start focusing on maximizing tension on your muscles. For that, mechanical flyes are superior to dumbbells.

The bodyweight pushup rated low. The principal problem with this exercise is the “bodyweight” part. In fact, it’s not all your bodyweight. One study demonstrated that you hold 69% of your weight in the up position and 75% in the down position. Average this to 72% and a pushup is the equivalent of a 188-pound person bench pressing 135. For most trained men, pushups are like doing a warmup set of benches. If you can do more than 20 in a row, add resistance with weight on your back and/or elevate your feet (the latter will focus this more on your upper pecs). Or just forgo pushups—unless you can’t get to a gym.

The bodyweight pushup rated low. The principal problem with this exercise is the “bodyweight” part. In fact, it’s not all your bodyweight. One study demonstrated that you hold 69% of your weight in the up position and 75% in the down position. Average this to 72% and a pushup is the equivalent of a 188-pound person bench pressing 135. For most trained men, pushups are like doing a warmup set of benches. If you can do more than 20 in a row, add resistance with weight on your back and/or elevate your feet (the latter will focus this more on your upper pecs). Or just forgo pushups—unless you can’t get to a gym.

Another exercise, the dumbbell pullover, rated even lower. It was frequently included in chest routines decades ago because of the erroneous belief it expands the rib cage. It doesn’t. Nothing does. It works primarily the lats and the serratus and, to a secondary degree, the long heads of the triceps. Pullovers belong in your back routine.

So, what to make of all the other chest exercises? First, some weren’t included in any of the EMG studies. We’d love to see how Hammer Strength machine presses, Smith machine presses, and machine incline flyes stack up, to name only three. Others that were included did okay. A machine chest press in one study and dumbbell bench presses in the other both activated pecs 79% as well as their barbell equivalents. So, they’re acceptable substitutes.

As for dumbbell flyes, averaging the two studies (one flat, one incline), we get 66%. In comparison, the cable crossover average is 94% and the pec deck fly is 90%. Again, it comes down to the gravitational pull. Because the dumbbells travel in an arc instead of a horizontal plane, pec tension is lost—especially during the top halves of reps. You can compensate by bringing the dumbbells up in more of a fly-press oval shape (higher at the top) instead of a round arc or by doing only the bottom two-thirds of reps. Or just do machine flyes.

Dips scored 69% for overall pec stimulation in one of the two studies, but the third study rated weighted dips the highest of all exercises for lower pec stimulation. Most people want to focus more on the upper third of their chests than the lower third, but dip away if you want to expand your pec bottoms. A routine with incline presses, dips, and cable crossovers would effectively work all areas. 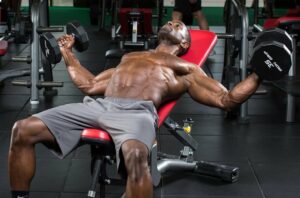 The “Benefits, Muscles Worked, And Alternatives” Of The Cable Pull-Through Exercise

The Best Triceps Exercises “To Maximise Muscle Mass” And Get Triceps...