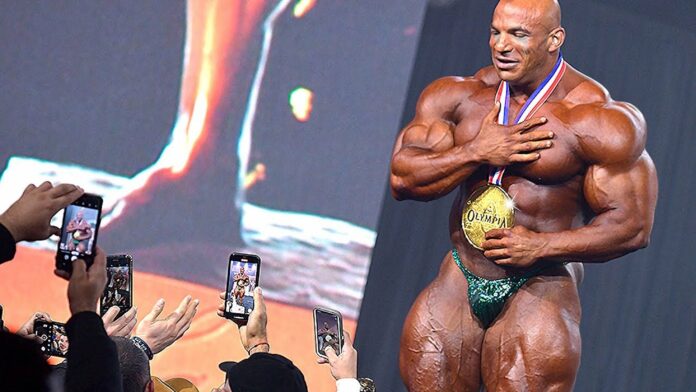 He was born in Al-Sebea near Baltim in Burullus district, Kafr El Sheikh.[4] He worked as a fisherman, where he went to Kuwait before he started to train professionally.[5]

Elssbiay earned his pro card by winning the overall title at the 2012 Amateur Olympia in Kuwait City, just three years after he started training.[6] In 2010, Elssbiay joined Oxygen Gym in Kuwait. By 2011, he weighed 200 lbs, and when he stepped on the 2012 Amateur Olympia Kuwait stage, he weighed in at 286 lbs and was declared the champion. In 2013, Elssbiay made his IFBB Pro-debut at the New York Pro, which he won. In 2020, Elssbiay won Mr. Olympia.

In October 2020, he tested positive for COVID-19 which prevented him from participating in the 2020 Europa Pro Bodybuilding Championships.[7]

Let’s start with the most important thing: the O. 2020 was a WTF year. Because of the pandemic, the Olympia was delayed three months until December and moved from Las Vegas to Orlando. Nevertheless, its lineup was stronger than the year prior. Featured were three previous Mr. Olympias: 7-time winner Phil Heath, returning champ Brandon Curry, and the winningest pro Dexter Jackson (in his final show). Also, vying for the title were the men who placed second (William Bonac) and third (Hadi Choopan) in 2019. All of those names were mentioned before Big Ramy in most prognostications. After Ramy placed a disappointing sixth in the 2018 Olympia, sat out 2019, and was third behind Bonac and Jackson at the 2020 Arnold Classic, he seemed to be regressing. The rap was Ramy would always be the widest guy and flex the biggest quads, but he just couldn’t bring out enough details for bodybuilding’s ultimate title. When he contracted Covid-19 and had to drop out of an October contest, he needed a special invite just to enter the 2020 Olympia. It had been three long years since he’d been in the O top five. But in Orlando, after working with trainer Dennis James and nutritionist Chad Nichols, he shocked the world by finally appearing hi-def. Ramy romped to victory, easily becoming the 16th Mr. Olympia in the contest’s 56-year history.

2. He was nicknamed before bodybuilding.

When Dennis James told me about Mamdouh Elssbiay in 2012, he said everyone calls him “Big Ramy.” I assumed this was because his given name could tongue-tie English-speakers. But, no, his nickname is his name. Everyone does indeed call him Ramy and only Ramy, including the Arabic-speakers in his native Egypt and even his wife. And everyone was doing so before he ever stepped on a bodybuilding stage. Ramy means “loving” in Arabic (it also means “archer”). He earned the nickname because of his friendly personality. Only “Big” came later, for obvious reasons.

3. He was a fisherman in Egypt and then lived in a Kuwaiti gym.

Ramy was born into a large family on September 16, 1984, and raised in a small seaside town on the Northern coast of Egypt. Like his father and his six brothers, he became a fisherman. It seemed that was his destiny. But he enjoyed lifting weights, so he trained other men in an Oxygen Gym in Kuwait. When his muscle-growing potential impressed Oxygen’s owner, Ramy moved into a room in the flagship Oxygen. “A typical day for Ramy is that he wakes up, goes downstairs and does cardio, showers, then he works the pro shop for about 10 hours a day, trains that night, and then goes to sleep,” James said of those early years when he began coaching Ramy via translated messages from America.

In 2009 at 25, he began to pursue bodybuilding seriously. Remarkably, two and a half years later he’d already morphed into one of the world’s best bodybuilders. In 2012, he won the first three bodybuilding contests he entered (two in Kuwait, one in Qatar). Competing at 286 lbs. and qualifying for the IFBB Pro League, already he was the talk of bodybuilding. Believe the hype. In May of 2013, he won his pro debut—the New York Pro—only his fourth bodybuilding contest! He repeated as New York champ the following May, part of a five-year string of winning one pro show annually. Meanwhile, he climbed through the Mr. Olympia ranks­, from eighth in 2013 to second in 2017. But for the subsequent three years, it looked like that would be his career apex. Was this star who burned so brightly so fast fading out? Of course, the best was yet to come. Currently, he’s the fourth Olympia champ over the last four years. Can he break the string and repeat this October in Orlando?

5. He’s only the second Mr. Olympia to live outside America.

Three of the first four Mr. Olympias were immigrants to America, including Arnold Schwarzenegger, and that’s true of two more since. But only one other Mr. O, England’s Dorian Yates, a 6-time winner, lived outside the U.S.A. during his reign. Ramy lives in Egypt with his wife and their daughters. When, for decades, American muscle magazines dished the publicity, it was almost mandatory O top contenders live in the U.S.A.—ideally, Southern California. But with the demise of print and the rise of the internet and social media, pro bodybuilders can now publicize themselves anywhere from their smartphones and YouTube accounts. Fifty-five years after the first Olympia in 1965, Ramy’s victory last December represented the globalization of bodybuilding at its highest level. Bodybuilding is especially popular in the Middle East, and, as an Arabic-speaking Muslim in Egypt, Ramy is only expanding its acceptance there.

Sleep Study: “Is Sleep The Best Way To Build Muscle”? How...

Bodybuilders Power Their Way To Venice for “The Annual Labor Day”...