Powerlifter Julius Maddox unsuccessfully attempted to smash his own raw bench press world record on Saturday when he tried to lift 800 pounds (363 kilograms).

That weight is similar to that of a grizzly bear, a yak, or an American bison, and would have far surpassed the record of 770 pounds (350 kilograms), which he set in March last year.

Maddox first set the all-time record for the heaviest raw bench press ever at the Xtreme Powerlifting Coalition Slingshot Showdown at the Arnold Sports Festival.

The Kentucky athlete has since broken that record twice and has been zoning in on the 800 target.

His attempt to hit that target in June ended when an extra 25-pound weight was misloaded on one side.

“The second attempt on Saturday did not go to plan either, with Maddox not quite managing the load at Chicago’s Wrigley Field”.

Maddox uses wrist straps but no supportive equipment such as a belt. Another American, Blaine Sumner holds the world record for any bench press, lifting 885 pounds (401 kilograms) at the Arnold Sports Festival in 2016.

At high school, Maddox was projected to be a division-1 football player, according to his website, but those plans were derailed by “several wrong choices.”

“From dealing with drug addiction, depression, and jail time I was left at rock bottom, “ he writes on the site. “After being given a second chance and entering a recovery program. I chose to make a change.”

Shortly after, the American previously told Muscle and Fitness magazine of the moment he realized his powerlifting potential.

While in a treatment facility for drugs and alcohol, his friends loaded the bar with all of the weight in their basement gym and pressed.

“We were just joking around…and I moved it for reps and it just blew my mind,” Maddox said. The weight on the bar: 525 pounds.

Asked for his top benching tips for the magazine, Maddox encouraged others to think of your elbows as a corkscrew.

“They should stay tucked in at 45 degrees and flare out a little bit as you lockout,” he said. “Think of football players when they fire off, they’re pushing with their hands and elbows tucked. That’s how they generate more power.” 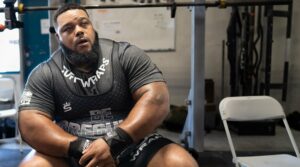 See “The Most Recent Michael B. Jordan’s Insane Workout” To Get...