The World’s Strongest Man starts 2021 with a big victory in Bahrain.

In the midst of high heat in Bahrain, the first major international strongman contest of 2021 took place. World’s Ultimate Strongman’s “Strength Island” was held on March 13th, and it was watched by fans around the world on CoreSports, the Rogue Fitness YouTube channel, and even on ESPN. 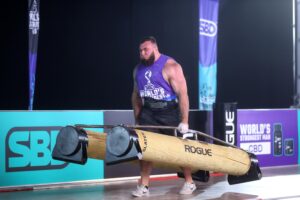 Five events were on the calendar and 15 of the elite strongmen in the world were in this lineup, including 2020 World’s Strongest Man Oleksii Novikov, brothers Luke and Tom Stoltman, and Rob Kearney, who was returning to competition after recovering from a ruptured triceps. In the end, Novikov would leave as the champion, thanks to winning two of the five contests, while taking top three positions in the other three. J.F. Caron of Canada finished in second place.

You can watch the broadcast in its entirety via the embed further down in this article.

This ladder event required the athletes to perform the axle deadlift for as many reps as possible until they completed all six of the weights ranging from 320 kg to 440 kg (705 pounds to 970 pounds). There were larger plates used on the bar, which made the lift more similar to a rack pull.

The original intent was for the athletes to add their own weight after each successful rep was completed. This was later changed and spotters began loading the plates for the athletes. While deadlift specialists such as Rauno Heinla and J.F. Caron were considered the favorites, it was actually American Bobby Thompson that shocked the field and claimed first place in this contest. Heinla finished in second place while Novikov placed third.

This was the “mystery event” that was promoted leading up to the competition. No athlete knew about this until 24 hours before the contest. A flag was attached to a rope on a pulley that also had 75 kg of plates attached. Athletes had to pull the rope until the flag reached the pulley which was 50 meters high. The flag also had to be returned to the ground under control. Competitors had one minute to perform as many reps as possible. Some athletes wore gloves while others opted to use bare hands.

With four pulls successfully completed in less than 42 seconds, Luke Stoltman claimed the top spot in this contest. The runner-up was Ramin Farajnejad while Novikov took the bronze position for the second straight event.

The athletes had to clean the 100 kg (220 pounds) dumbbell up to a shoulder and press with one arm overhead until the judge calls the rep good. They had 75 seconds to perform as many reps as possible. Two competitors went head-to-head to keep the event moving faster.

Novikov was the overwhelming favorite for this event, thanks to the world record that he owns of 11 reps with this weight. He didn’t quite get that many, but he did get 10 reps here. The only hiccup he suffered was the dumbbell bouncing after hitting the ground, which meant he had to take time to recover it. He took the event thanks to that effort for his first victory of the day. Stoltman finished as the runner-up.

The athlete that can load all three objects in the quickest time possible was the winner. The shield was the final and most challenging phase of this event due to its shape and the high platform that it had to be placed on. Several competitors dropped it while trying to load it. Novikov took his second straight victory as well, which put him in a great position to take the overall title going into the final event.

By the time the competitors got to the last event, they had already performed four events in less than three hours. Exhaustion was clearly taking a toll on them going into the Atlas Stones Run. The 10 stones range from 100 kg to 200 kg (220 to 440 pounds). The goal is to load all 10 onto their platforms as quickly as possible, up to the time limit of two minutes.

Tom Stoltman holds the world record for this event with a time of 40.7 seconds. He didn’t beat the record, but he was able to complete all ten stones in 67 seconds. Novikov also managed to complete all ten stones. As a result, the 24-year-old claimed the overall title of “Strength Island” Champion. Caron returns to Canada as the overall runner-up after also finishing all ten stones. Aivars Smaukstalis didn’t win any event, but he was high enough on every event that he scored enough points to leave Bahrain with third place. 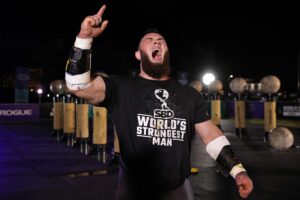