The Ultimate 10 Killer Tips To Boost Your Squat 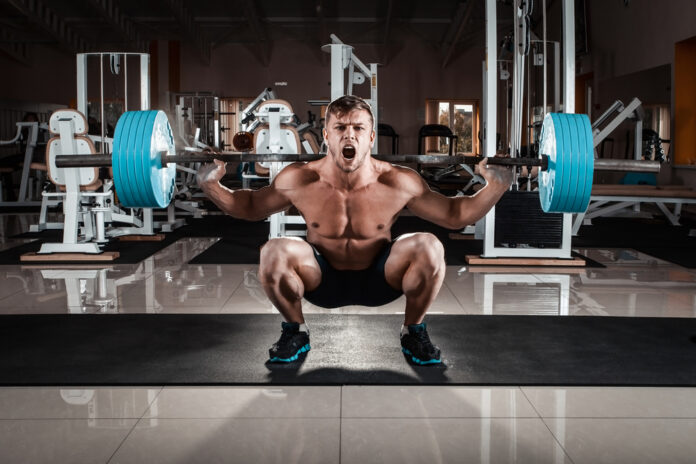 “To maximize the squat you need the mobility to reach proper position and the stability to control movement through the intended range of motion.”

Problem is, most lifters have the mobility of a cast-iron skillet and lack the ability to squat safely and effectively. To maximize the squat you need the mobility to reach the proper position and the stability to control movement through the intended range of motion.

It’s time to maximize your squat potential through improving technique, mobility, and execution. With these ten tips, you’ll take your squat performance to new levels. 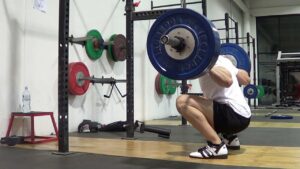 Despite the fact you need to train heavy to build maximum strength, people often neglect heavyweights.

Yes, training with submaximal loads will spare your joints and nervous system to a degree, but even to maximize submaximal training you need a base of absolute strength.

Training at 60% 1RM for speed is much more effective when your 1RM is 1.5 to two-times your bodyweight.

Hit the reps you know you’ll make and save yourself for the occasional max-out attempts.

Strength-speed and speed-strength are synonymous with power. They produce a sky-high power output compared with longer-duration, lower-velocity maximum strength exercises.

“Compare a tractor-trailer and a Ferrari. It’s great to have a ton of horsepower, but for high performance, it’s best to generate horsepower rapidly.”

For breaking lifting plateaus or achieving more weight-room transfer from athletes, power development is key. Compare a tractor-trailer and a Ferrari.

It’s great to have a ton of horsepower, but for high performance, it’s best to generate horsepower rapidly. Remember: Power= Work/Time

Most research shows that maximum power is achieved through moving moderate loads at high velocity with loads of 40-60% of your 1RM.

Depending on the athlete, there will be differences within this range and some experimentation will be needed to find what’s best.

For a big squat, speed squats are ideal for power development and technical practice.

These can be used as long as a decent base of absolute strength is present and technique isn’t an issue.

Once again, the greater your base of absolute strength, the easier it will be to express explosive strength. For most lifters, keep the emphasis on explosive jumps that match the biomechanics of the squat closest, i.e. jump squats.

There are tons of variations that address the speed of movement, landing mechanics, and power without too much risk.

Your best choices are broad jumps, vertical jumps, and box jumps to increase your rate of force development and explode through sticking points.

Squatting twice per week allows you to focus on one heavy and one-speed session. Separate these sessions by 48-72 hours for a full recovery.

“Targeting the squat pattern with multiple sessions per week while addressing the force-velocity spectrum leads to greater gains in power, strength, and explosiveness.”

I like to combine a speed-strength method before squatting, followed by maximum strength (85-95+%) on the first squat day.

On the second day, I’ll emphasize a pure speed movement with a submaximal strength-speed squat (40-75%). Targeting the squat pattern with multiple sessions per week while addressing the force-velocity spectrum leads to greater gains in power, strength, and explosiveness.

Yes, building a big squat is great and should improve multiple performance parameters. But the keyword is “should.”

Too many coaches and athletes sell out for big totals in the “big three” and being hardcore with ass-to-grass (ATG) squats no matter what. 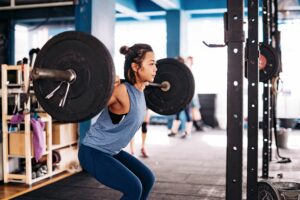 While ATG will earn you props on the interwebz, it doesn’t mean anything if you’re risking injury to the lumbar spine. If you squat to depth without a tuck – keep going.

But if you can’t maintain position due to lack of core control or bony hip anatomy, don’t force a deep squat.

Yes, back squats take the title as the King Builder, but front squats offer a plethora of benefits:

Allowing the knees to buckle in, known as valgus collapse, is a great way to reinforce poor mechanics and set you up for a knee injury.

For most people, allowing the knees to buckle engrains a dangerous technique, especially if it leads to uncontrolled valgus collapse during sport or recreation activities.

“Allowing the knees to buckle in, known as valgus collapse, is a great way to reinforce poor mechanics and set you up for a knee injury.”

Prevent valgus collapse by spreading the floor and pushing the knees out during the squat. This emphasizes hip and posterior chain development and will skyrocket your squat numbers.

If you’re squatting to depth, you need to be stable in the bottom position. Train the pause by using submaximal loads and squatting to maximum depth while maintaining trunk integrity (this means no butt-wink).

Unless you’re training for a big total and need to hit a certain depth, the risk versus reward probably isn’t worth rock-bottom squat under load in the presence of butt-wink. 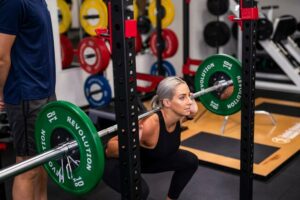 Don’t be lazy with the bar. Get your Hulk on and try to bend it around your body.

If you’re not actively applying force to the bar, the bar will act on you – jumping off or burying you in failure.

“If you’re not actively applying force to the bar, the bar will act on you.”

Drive your elbows down and back to engage the lats, provide a larger shelf for the barbell, and create additional stability in the trunk.

Additionally, you’ll prevent the bar from jumping off your back during explosive squats, improving rep quality and decreasing injury risk.

You don’t want to be that chump who loses a barbell behind your back during training anyway.

We’ve all seen it: a rack set-up too high, a calf-raise walkout followed by the poor sap nearly cracking his skull when re-racking.

Besides inappropriate barbell loading, improper rack set-up is the best way to get injured.

Set the rack up with the barbell set between nipple and shoulder height, low enough to allow you to squat to weight out and easily re-rack, as well.

The squat is a technical movement and squatting appropriately for your body type and goals are imperative to long-term success. Optimize your technique first, and then start piling on plates.

Take these tips into consideration and you’ll be squatting big weights without pain for years to come.

The Advantages/Disadvantages: “The Effects On The Body Of Doing Push-Ups” In...