Whether your goal is a six-pack or just a little more definition around your midsection, compound lifts like squats, overhead presses and deadlifts will help get you there, and they’ll build strength all over your body at the same time. That said, there’s also room for more focused abs work too, especially if you have designs on achieving a cover model-style six-pack.

If you’re looking to train your abs, the good news is that there are a huge variety of exercises that will help you achieve that goal. Even if you’re not doing moves that focus on them directly, the location of your abs means that they are worked hard by compound exercises that hit both the upper and lower body. Your core is also key to any exercise in which you have to keep your body stable, such as static holds like the plank or tricky balancing acts like the single-leg Romanian deadlift.

Here are the Abs Workout to Make You Sore

Most people treat their abs as accessory muscles which is why only a few people have a chiseled six-pack while the others are always figuring out a way to get them. You need to train your abdominals as you train all your other muscle groups.

Doing a couple of ab exercises at the end of a workout isn’t going to budge the needle when it comes to building a six-pack. There are only a few things more satisfying than having sore abs for a week after you train them.

We start the abs workout with the ab wheel rollouts. The ab wheel rollouts work your complete upper body and help in building core strength. If you don’t have access to an ab wheel at your gym, use a barbell and put a quarter plate on each side.

Maintain a full range of motion while performing this exercise and pause for a second at the bottom of the movement. All the exercises in this workout will be done to failure. Don’t stop until there is nothing left in the tank.

We’ll be training the complete abdominal in this workout. The hanging leg raises target the lower abs while the kneeling cable crunches will train the middle and upper abs. Using cable in the crunches puts constant tension and resistance on the abs.

Maintain a constant repetition tempo while performing all the exercises. Don’t rush through the exercises and focus on maintaining a mind-muscle connection with your abs and contract your abs with every rep.

In the giant set, we will be training the upper, middle, lower abs along with the obliques. Obliques are the fish gill-like muscles at the sides of your abs and are one of the most overlooked muscles.

All three exercises are done while lying on the floor so you don’t waste time switching positions. Go from one exercise to another without stopping for rest in between sets. You can take a minute’s rest after completing one giant set.

Your goal should be to complete this workout in half an hour. The abdominal is a small muscle group and doesn’t need a lot of time to recover between sets. Both the exercises in this superset are focused on developing your obliques.

For the landmine ab twists, anchor one end of a barbell in a corner. Grab the barbell from the other end with both hands at neck level. Perform the movement by rotating the trunk and hips as you swing the weight to the right side. Return to the starting position and repeat on the left side.

Planks have earned a name for themselves for being an ultimate core strength-building exercise. We start and end the workout with core strengthening exercises. Hold the planks for as long as you can.

By the end of the workout, your abs should be filled with blood and lactic acid. Don’t be surprised if you cramp up during the workout. One workout like this in a week should be enough to get you the washboard abs. 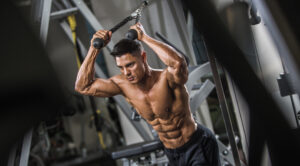 Squat Depth: Learn “The 4 Reasons” Why You Can’t Squat To...