See “The Most Recent Michael B. Jordan’s Insane Workout” To Get Jacked Arms For Creed 3

If you want to play a boxer in the ring on the big screen, then it is important to work out like a boxer off the screen as well. That seems to be something that Michael B. Jordan is taking seriously in his approach to getting ready for another movie in the Creed franchise.

In a recent Instagram post, Jordan had his workout routine highlighted for a glimpse into what the pre-movie prep looks like. Considering the actor has basically embodied every bit of what it’s mean to play the son of Apollo Creed on the big screen, this kind of dedication makes sense and is even probably necessary. Now, getting ready for Creed 3, the actor is back at it, putting in the work for the film.

The Instagram post of Michael B. Jordan was put up by Corey Calliet, a professional trainer with the handle @mrcalliet. With a massive following (436K) on the social media platform, Calliet is dedicated to bringing some of his methods for physical fitness to the forefront and it’s easy to see why a guy like Jordan would be working with him. With a voiceover from Denzel Washington taken from a speech he gave at the 2017 NAACP Awards, Jordan can be seen below putting in the training. Check out the post.

This kind of preparation is just one of the reasons Michael B. Jordan has had such a successful run in the Rocky reboot franchise with Creed. There were a lot of ways that pivoting this franchise into a new character, this one the son of the deceased Apollo who died in the ring in Rocky IV shouldn’t have worked. It could easily have devolved into cliches, trying too hard to emulate past plot points from different iterations of Rocky. But Michael B. Jordan has helped bring the story to a new generation, fully embodying the anger and intensity of Adonis, bringing two movies that have hit almost every note.

Creed 3 will continue the story brought forth in the first two movies which were both critical and box office successes. Michael B. Jordan and Ryan Coogler teamed up for the first flick which reset the story and earned rave reviews. It’s sitting at 95% on Rotten Tomatoes with near-universal praise for Jordan’s portrayal of Creed. And it won at the box office as well, earning more than $173 million on its $35 million budget. The sequel did even better with the ticket sales, putting up $214 million on a $50 million budget. It was a critical darling as well, scoring 83% on the aforementioned Rotten Tomatoes.

As mentioned in the Instagram post, Michael B. Jordan isn’t just putting in the work to play Adonis “Donnie” Creed on the big screen, but for this next movie, he’ll be moving behind the camera as well. Jordan is directing Creed III. It will be the directorial debut for Jordan who has already had his share of career highlights in front of the camera.

It’s not totally clear in which direction Creed 3 will take the story or how Michael B. Jordan will treat this new installment. The first two movies took their notes from the original Rocky movies in some respects with the sequel taking Adonis over the Russie much like Rocky did in the fourth film. The plan now is to have a release in late 2022, with November 22nd as the target date. With Michael B. Jordan putting in the work, filming for the movie might be getting underway soon. The dude looks ready. 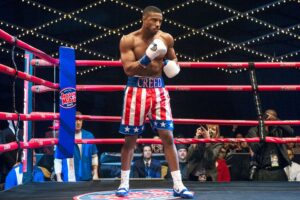 2020 Arnold Classic Champion William “The Conqueror” Bonac “Is Reportedly Out...