The Natural Olympia is the Natural Bodybuilding equivalent to the Mr. Olympia in the IFBB Pro league. It is the pinnacle of the year for the best natural bodybuilders on the planet. Athletes come from far and wide to battle for the honor of the title. It’s a competition that is growing in size and scope each year. Generation Iron Network went behind the scenes of the event in 2019 during the filming of Generation Iron: Natty 4 Life.

How To Watch The 2021 Natural Olympia

Even though the Natural Olympia is taking place in Las Vegas, Nevada – the event will also be live-streamed in segments via the official INBA/PNBA Facebook page. Each division will be streamed as an official video segment. These live stream13s can also be rewatched after each streaming segment ends.

The competition events begin at 9 am PST. Watch the official live stream of the 2021 Natural Olympia right here.

How The Drug Testing Works

The INBA/PNBA league uses the most sophisticated and advanced drug-testing system in professional sports – the World Anti-Doping Agency (also known as WADA). WADA testing is the same system used for the Olympics every four years – and is known for it’s accuracy and quality.

The INBA/PNBA league uses WADA testing before every major competition. If a pro natural bodybuilder should fail the test, their titles are revoked and they are placed on the INBA/PNBA Wall Of Shame – a virtual list of competitors who have attempted to cheat the competitions and drug tests.

How The Judging Works

This is a natural show which means that there are some differences from the IFBB shows. The biggest distinction when it comes to judging is the size of the athletes. There is not as much muscle mass for natural athletes as opposed to IFBB competitors, specifically Men’s Open. Despite the difference in size, athletes compete in similar categories.

In the Men’s Physique division, competitors perform bodybuilding poses and a T-walk. The judges have to adjust because the muscle mass is smaller despite the level of conditioning remaining high. Athletes can qualify for the Natural Olympia by competing in one PNBA competition. This has to be a professional show and they do not need to win a specific placing.

Ricardo Jr. recently took part in an exclusive interview with Generation Iron. He plained that it was a last-minute decision to enter Mr. America. Despite his fourth-place finish, Ricardo Jr. believes this was an effective strategy in preparing for the Natural Olympia. Ricardo Jr. will be one of the favorites to win the competition, especially with defending champion Meshack Ochieng not taking place during the event.

The Men’s Physique division will have no shortage of champions. The gold medal winners from the previous four years will be back on stage competing against each other. Jon Tsui is the defending champion and will have a chance to make it two in a row. Back in July, Tsui was named as an INBA PNBA Natural Bodybuilding Hall of Fame inductee.

Joseph Ortiz will also return to the stage, along with the 2018 champion Colin Congo. William Long won Men’s Physique at the Natural Olympia in 2017 and he is the fourth gold-medal winner that will be present. This makes for an exciting competition in this division.

The Best In Pro Natural Bodybuilding Compete This Weekend

This is a sport that has been growing in recent years and it is because of competitions such as this one. It began with the Mr. America show and will continue at the Natural Olympia. 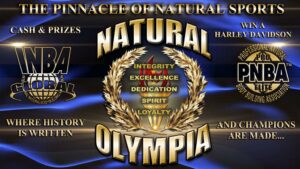