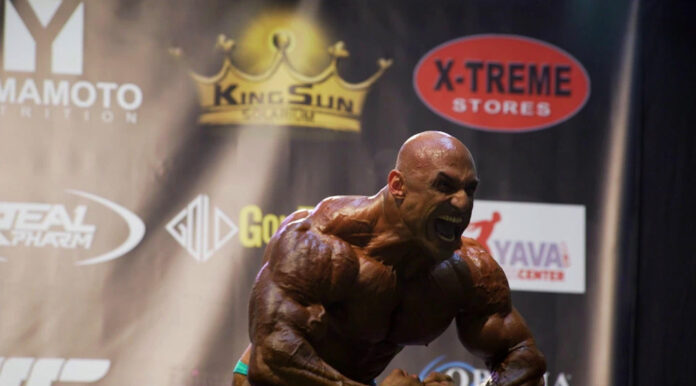 Personal demons, strict diets, incredible sacrifices, and almost unachievable ideals shape the daily life of bodybuilders. Months of intense preparation lead to a few moments on stage where a handful of judges will decide their fate. Some call it a sport, a lifestyle, a vanity; to others, bodybuilding is a religion. All agree, though, that once a bodybuilder, always a bodybuilder.

“Made in Vain” is director Michael Klioumis’ intimate portrait of the lives of Greek bodybuilders. Produced by Louizos Aslanidis for Ekso Productions, with the support of the Greek Film Center and EKOME, the film has its world premiere in the Newcomers International Competition at the Thessaloniki Documentary Festival.

Klioumis said he tried to keep an open mind when entering the hyper-competitive world of Greek bodybuilding for his second film. “I wanted to make something that was completely impartial,” he told Variety. Given access to the private lives of competitors who detail everything from their precise protein intake to their daily steroid regimens, Klioumis “decided to let the participants describe their own journey and their own truth.” The rest of his conversation follows below.

Can you tell me what inspired you to make this movie? Did you have any exposure to the world of bodybuilding before?I learned from a friend that there was a bodybuilding scene in Greece about five years ago. I was looking around to see what it was about, and then I went to a competition, and it really excited me. I had never seen such people, and it really amazed me—first, the incredible amount of discipline they have, the labor they do, and the fact that they don’t necessarily do it to make money. It’s an overwhelming love they have for it. All of this won me over, and I wanted to share it with the world, especially people who didn’t know anything about bodybuilding. But mostly it was my amazement that made me want to make this film.

Several of the subjects of the film talk about the intense sacrifices they had to make for the sake of success. Did you get a sense that they had any personal lives outside of bodybuilding? What sort of people were they outside the gym?The truth is that the sacrifices are huge. Just the sacrifices in their diets are terrible—to not eat any fat, for example, or have any fat on their bodies. It’s necessary, and it takes up a big part of their days because they have to work out very intensely, they eat constantly, because they have a very high metabolism. But the reality is they do have lives outside of that. They have families, they’re happy. And that’s a stereotype I wanted to break—the idea that this is everything for them, they don’t have lives, and so on. But they do have lives outside the gym. They’re not so different—they’re people like us.

We hear a lot about the subjects’ dietary requirements, their regimen of supplements and steroids, the high cost of sustaining all of that. Was there anything they told you about what their lifestyle required that really blew your mind?I can’t really say there was anything that blew my mind, apart from the incredible sacrifice, really. But what really made a huge impression is that all of the constant preparation ends in just 15 minutes on stage. I tried to put myself in their place, to imagine that I’ve spent one year with intense workouts, with a strict diet, with sacrifices, in order to show the judges what I’ve done with my body, not to have the anxiety to compete with the others, to not collapse on stage. All for 15 minutes, to present myself in the best way possible. Some told me that there are athletes who might be better than others, but who haven’t managed—for one reason or other—to present themselves well or others who manage to hide their imperfections and still win. That’s something that made a huge impression, the difficulties they have when they’re on stage.

Now that he’s had some distance between himself and his competitive years, George has obviously spent a lot of time thinking about the sort of person he was as a bodybuilder, and the toll it took on both his mind and body. Did you come across many others in the community who showed that same degree of introspection, or were most of them too caught up in their pursuit of success to think about the consequences?There are many who, once they stop competing, change. They don’t stop playing sports or staying in shape, but they stop competing and they change their daily routines. Many of them want to stop doing it competitively, but to continue as amateurs, for their self-image and health. Their priorities change. Maybe they had bodybuilding as the number one thing. Suddenly, they want to have a family. In the beginning, they all start out wanting to be athletes. At one point, it’s not possible as you get older to continue to compete. It’s very difficult to maintain low body fat, to have a low-carb diet, and so on. So they leave the competitive part behind.

Ultimately, what did you take away from their pursuit of these almost unattainable physical ideals?I saw it up close and thought that I couldn’t do one-hundredth of what they do. I think for us, who aren’t concerned with bodybuilding, it’s completely unattainable, the physical ideal. Personally, I couldn’t even imagine how to achieve that kind of body, because I can’t make the sacrifices. I can’t stop eating—I love food. I can’t work out every day. That type of person has incredible discipline and drive, a great love for bodybuilding, and they do it with all their strength. That type of decisiveness to achieve it is incredibly impressive. I wish I had the same dedication for certain things in my own life. There are times I want to write something, and I start, and I lose my focus. That doesn’t happen to them. They’re very dedicated.

The Benefits Of Weightlifting: Lifting Weights A Few Times A Week...

Thor “The Mountain” Bjornsson Shared a “Slideshow” Of His Terrifying Physique...