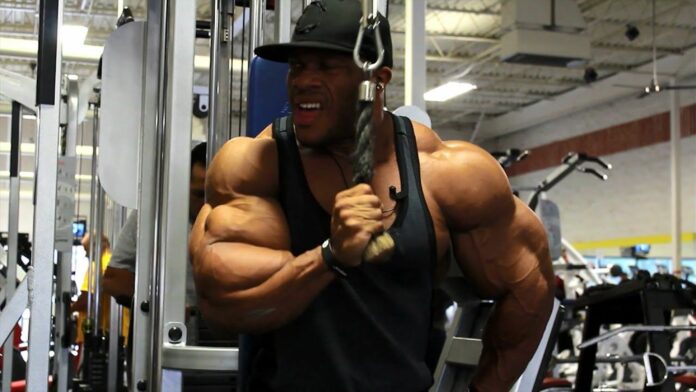 Triceps are both simple and complex. On the one hand, they have a basic job: to move your arms from contraction (bent) to extension (straight) via a hinge joint. On the other hand, their anatomy is deceptively intricate.

They’re made up of three heads, two of which are similar and one of which goes its own way with a completely different attachment. So, no single exercise does a great job of working all three. But what does the best job of hitting each head? And what doesn’t do a particularly good job of hitting any of them? We’ve read the scientific studies. We have the answers.

If we start at the bottom, all three heads attach to a wide tendon connected to the ulna (forearm bone). The lateral head lies on the outside and, at the top, attaches to the humerus (upper arm bone). The medial head lies mostly below the other two heads (it’s visible on either side nearest the elbow) and also attaches at the top to the humerus, below the lateral attachment. The long head lies on the inside and attaches at the top to the scapula (shoulder blade).

“Because they share similar top and bottom attachments, the lateral and medial heads work similarly. On the other hand, the long head has a somewhat different agenda. While all three heads straighten your arms and keep your arms straight, the long head, because it attaches the forearm to the shoulder, also assists in pulling your arm down and backward”. (For this reason, you’ll feel your triceps working while doing straight-arm pulldowns for your lats.) 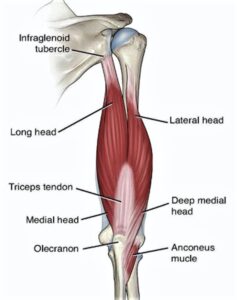 German researchers conducted a study with 10 resistance-trained young men, measuring, via electromyography (EMG) monitors, the activation of their triceps heads during 11 exercises. Most of the exercises were triceps isolation lifts (like pushdowns), but the study also included compound lifts, including wide-grip guillotine presses (bench presses to the neck), pushups, and behind-the-neck overhead presses. All triceps exercises work all three heads to some degree, but each exercise also works either the lateral and medial more or the long more. In the following chart, we’ve highlighted the top three activators, two for the lateral and medial heads and one for the long head: 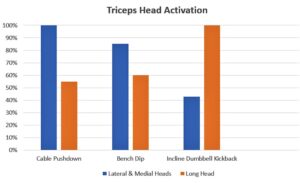 Best For Lateral And Medial Heads

That the PUSHDOWN best activates the showy outer triceps is great news for most of you reading this because it’s undoubtedly the most popular triceps exercise. There is some evidence that pushdowns done with a rope are slightly more stimulative than those done with a straight or angled bar, due to your ability to better focus on contractions by pulling rope ends apart at lockouts.

Second place may be a surprise because the BENCH DIP has fallen out of favor this century. It’s performed with your hands slightly behind your back and on a bench or Smith machine bar set low. Your legs are straight and your heels are on a bench or box. Dip down to where your upper arms are nearly parallel with the floor and rise back up. (Go lower and you risk straining your shoulder joints.) Rest weight plates or chains across your thighs to add resistance. A dipping machine approximates this movement.

Honorable mention goes to the regular DIP, keeping your torso upright, as well as the EZ-BAR LYING TRICEPS EXTENSION (a.k.a. skull crusher).

The best exercise for the long head is the INCLINE DUMBBELL KICKBACK, which is performed face-down on an incline bench (set at around 30 degrees) and with your upper arms are parallel to the floor. As we noted, helping to pull your arms backward is another unique function of the long head, and the German study demonstrated that this incline position is about 20% more effective than regular kickbacks, which are done with both your arms and torso parallel to the floor. (Both methods work the long head much more than the lateral or medial heads.)

In second place is any OVERHEAD TRICEPS EXTENSION, whether with an EZ-bar, dumbbell(s), cable, or machine. By starting each rep from a fully stretched position (elbows up), the long head contracts with more force and it take on more work than the other two heads.

By the way, the BEHIND-THE-NECK SHOULDER PRESS, a shoulder exercise, was shown in the German study to be remarkably effective at hitting the long head. We suspect this occurs more at lockouts when the triceps take over much of the work and the long heads fully contract. To turn this shoulder builder into a true triceps grower, try doing these in a power rack or on a Smith machine set up so you only move through the top third of typical reps.

The guillotine press scored relatively low in the German study. And yet, in another EMG study, with only one subject (the researcher), the guillotine still ranked ahead of the CLOSE-GRIP BENCH PRESS for triceps stimulation. As that study confirmed, both presses are mostly chest exercises. That’s not to say you should never do presses for tri’s. Presses main advantage is progressive overload; you can lift heavier metal than with other tri exercises.

However, “Don’t do them first in your triceps routine if your main goal is growth and not pressing strength. Instead, pre-exhaust your tri’s by doing presses last after isolation exercises like pushdowns and overhead extensions. In that way, your tri’s give out before your pecs. Also, as with overhead presses, you may want to do the lying presses in a rack, focusing only on lockouts. Pressing can be a valuable way of working triceps, but much more so if you do it at the right time in the right way”. 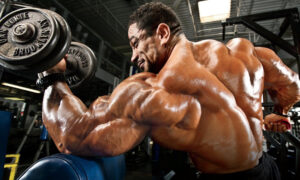 Experienced Experts Recommend These 5 Exercises Men Should Avoid “To Regain...

Learn On “How To Do Hammer Strength Bench Press Exercise” Properly...