The NPC Dexter Jackson Classic in Jacksonville, Florida, will continue its 16th annual year. This amateur bodybuilding competition sanctioned by the National Physique Committee will entertain and motivate hard-working amateur athletes as young as 16 and as old as 75 will showcase their best physiques on stage. “After a tough 2020 with gyms closed and limited bodybuilding competitions, athletes deserve a first-class experience to reward all their hard work,” said Chris Minnes, promoter of the event and founder of Center Podium Productions.

The sport of bodybuilding includes competitions for various body types, encouraging people of all ages and builds to get in the best shape of their life and showcase their hard work on stage in front of friends, family, and fans. The categories are bikini, figure, men’s physique, men’s bodybuilding, classic physique, women’s physique, wellness, and fitness. Many categories have the desirable GQ, Men’s Health, or a Sports Illustrated Bikini model look and the well-known “massive muscle” features of the bodybuilding division. One can’t help but become motivated after seeing how a few months of dedication to health and fitness can transform any physique!

Of course, Mr. Olympia, Dexter Jackson, will also be there throughout the shows to grab a selfie or impart a bit of the wisdom that helped him stay at the top of his class at Mr. Olympia at 50 years old. “Nothing makes me happier than the opportunity to inspire the next generation of athletes,” says Mr. Olympia Dexter Jackson. “They say I motivate them, but the last 16 years of hosting this event have kept me driven, knowing how many people look to me for motivation”.

“We are pleased to be recognized by Dexter as the nation’s top NPC show producers and excited to continue growing this event in Dexter’s hometown of Jacksonville for years to come,” said Chris Minnes, founder of Center Podium Productions.

Attendees will also get the chance to visit over 15 fitness vendors who will share their latest products and services. The products can help anyone achieve their health and fitness goals, varying from dropping a pant size or becoming a star on the bodybuilding stage. There will be companies with options for nutrition, gyms, personal training, fitness apparel, workout recovery, supplements, bikinis, jewelry, and massage guns!

In 2015, Jackson showed he was still a force to be reckoned with at the age of 45 when he placed 2nd at Mr. Olympia, his highest placing since winning Mr. Olympia in 2008. He retired from professional bodybuilding at the 2020 Mr. Olympia.

Jackson has been featured in many fitness and bodybuilding articles, including being pictured on Muscular Development and Flex magazine. He shot his new documentary DVD titled Dexter Jackson: Unbreakable with filmmaker Alex Ardenti of Ardenti Films in Florida and California, released in 2009. – Wikipedia.com

About UNF Lazarra Performance Hall
The 1,300 seat Lazzara Performance Hall is named for Gasper and Irene Lazzara, prominent civic leaders who donated $1.25 million to the performance hall’s funding. The fully-equipped theater is outfitted with state-of-the-art lighting and sound equipment and has excellent acoustics. It is the second-largest stage in the North Florida community. 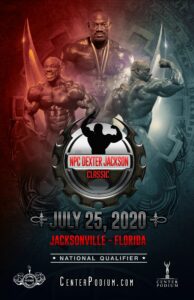