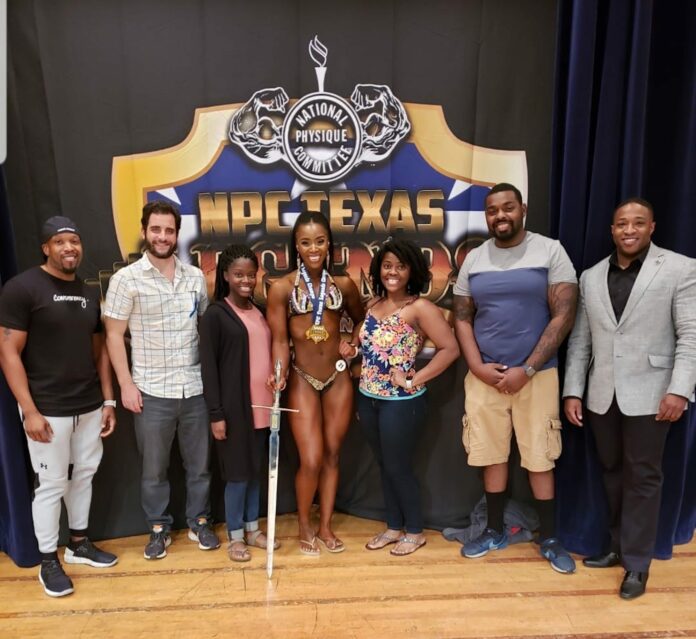 Leehna Ware, a 2009 Fermi High School graduate, has a passion for fitness which is both rewarding and inspiring. Check out her video.

From the time she was a first-grader in Enfield, Leehna Ware has been a competitive athlete, and oftentimes a champion. A dozen years and 1,700 miles removed from her record-setting basketball days at Enrico Fermi High School, she continues to succeed not only in athletics but as an inspiration and role model.

Earlier this month, the 2009 Fermi graduate took first place in the figure division at the National Physique Committee (NPC) Texas Legends Championships in Fort Worth, about 30 miles from her new hometown of Cedar Hill. The National Physique Committee is the largest amateur bodybuilding organization in the country and is the only amateur organization recognized by the International Federation of Bodybuilding and Fitness Pro League.

Her initial foray into bodybuilding came shortly after her 2013 graduation from Central Connecticut State University, where she earned a Bachelor of Science degree in biology. She became a personal trainer shortly thereafter.

“I realized I wanted a new challenge, I wanted something new to do, and I tried a bodybuilding competition and I haven’t stopped since. It’s been great,” she said.

Ware opted to compete in the figure division. According to the NPC, figure competitors “should display an overall balance of muscular development which includes rounded delts, sweep to the quads, back depth, and width – emphasis is on balance and symmetry.”

“I chose figure because I like the challenge,” she said. “I wanted a little bit more as far as muscle definition, and I wanted to be held to the discipline of muscle definition and symmetry. It is a very specific look. I’m building my shoulders, and my waist has to stay small. I’m trying to give the illusion by having the widest back possible.”

Earning accolades in athletic competition is nothing new to Ware. She was a 3-time All-CCC East basketball player at Fermi, leading the Falcons to back-to-back league titles and a CCC tournament championship in 2007. In her senior season, she became the only girl in school history to tally 1,000 career points and was named Class Athlete by her peers.

Nicole Delano, who has been close friends with Ware since kindergarten and co-captained Fermi basketball with her, told Patch, “She’s been my best friend for over 20 years. She’s always been there for me no matter what and has always been a constant in my life. She’s someone I can count on and is always encouraging and motivating. The grind never really stops with her; she’s always been a go-getter. Her work ethic is something I’ve always admired about her.”

A quality compliance supervisor for PepsiCo in Arlington, Texas, Ware’s continued dedication to success in her personal, professional, athletic, and spiritual endeavors has made her an inspiration to others.

“As far as being an influencer in body shaping, I really enjoy inspiring people to be healthier, to lose the weight they want to lose, and just to be a positive role model in that way,” she said. “I very much love God; I practice as much as I can as far as reading the Bible, and being humble and worthy to Him, and reminding myself that no matter what I do in this world that may make me feel unworthy, I am what He says I am.”