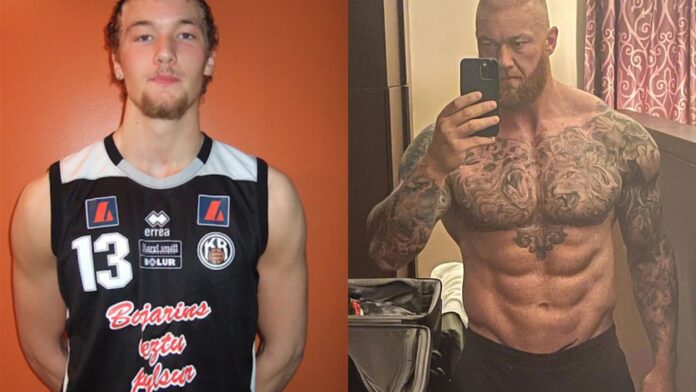 For many professional Strongmen and bodybuilders, the thought of Hafthor Bjornsson being lean is something they can never digest.

Hailing from Iceland, this tall, muscular strongman was not always bulky as many might have thought.

From his athletic beginnings in Kópavogur, where he started playing basketball, Hafthor was 6 feet tall and lean.

His basketball career lasted until 2008, where after suffering from recurrent knee injuries, he had to call it quits. This decision led to him pursuing his passion for becoming a strongman.

Following his retirement, he met Icelandic strongman Magnús Ver Magnússon, who inspired him to become a strongman.

The basic idea of becoming a strongman involves anyone improving their strength and having abilities to carry a large sum of weight over a set distance.

The most plausible way to achieve this is by lifting weights and improving one’s muscle mass. Hafthor embarked on his journey to become a strongman athlete by doing the same.

The impact this type of workout had on his body and achievements was immense. Within years after he first stepped into the gym, the difference in his body was visible.

He went from a lean, lofty basketball player to a girthy strongman athlete.

With a body that resembled “Hulk”, he went on to win the Arnold Strongman Classic, Europe’s Strongest Man, and World’s Strongest Man in the same calendar year.

This success and the massive body frame led to him landing a role on the widely popular TV series “Game of Thrones”.

Here he had the chance to look even bigger, as he was supposed to play the role of a colossal being.

Gaining more mass day by day, it seemed evident that he was on the verge of becoming a real-life Bruce Banner.

To the surprise of many fans, this was not the case.

He surprised his fans in one of his Instagram posts by posting a shredded picture of him. Where he lost an astounding 50 kilos for his exhibition fight against Steven Ward.

At 32, Hafthor’s passion for strength and size has brought him a long way from his humble beggings as a basketball player.